More Housing Board second-timers, worried about getting a poorer deal when selling their current homes, are choosing to forfeit thousands of dollars in deposits instead of collecting keys to their new flats.

Nearly one in 10 who successfully applied for a new flat last year pulled out of collecting their keys - up from 6.6 per cent in 2012, HDB said.
Second-timers are flat buyers who bought a subsidised flat earlier, and have applied for another.
While an HDB spokesman said this jump is "in line" with more new flats being completed in recent years, property analysts said this is chiefly a reaction to the cooling resale market.
As resale prices started falling in 2013 because of measures such as greater loan curbs, going through with a second flat purchase has become less worthwhile for some, they said.
"When they redo their sums, they realise that the sale proceeds from their existing flat will be less, and this would affect their financing and renovation of their next flat," said Mr Chris Koh, director of estate agency Chris International.
HDB flat owners have to dispose of their existing flat within six months of collecting the keys to their new unit.
"Some flat owners may want to sell their existing flat when resale prices are increasing again... at prices with a larger cash over valuation (COV)," said SLP International Property Consultants research head Nicholas Mak. He said many resale flats were sold last year for near-to-zero COVs, or cash premiums.
Although applicants forfeit 5 per cent of the purchase price if they give up the flat after signing the Agreement for Lease, analysts said this might be the lesser of two evils for some given the market now.
"They feel that it is better to forgo the deposit than to eventually be stuck in a situation where they cannot easily sell their existing flat... or end up making a loss," said R'ST Research director Ong Kah Seng.
Analysts added that the recent rise in quota for second-timers might have partly led to the spike in cancellations, since more of them were allocated flats.
The second-timer quota for Build-To-Order (BTO) flats in non-mature estates was raised from 5 per cent to 15 per cent in 2012. The next year, their quota for two- and three-room flats in non-mature estates went up to a third.
More second-timers have also been asking for more time to sell their existing flat, and postponing the collection of keys to their new units, said HDB.
There were 49 requests for an extension of the six-month grace period last year, up from just six in 2012 and 15 in 2013. There were also 125 requests to postpone the key collection last year, up from 46 in 2012 and 60 in 2013.
Pointing again to the cooling resale market, Mr Ku Swee Yong, chief executive of real estate agency Century21, said: "Many have to rework their finances or take a longer time to sell their existing flats at a better price." He added that such requests will likely be more common as weak resale prices persist.
Such a bleak outlook is worrisome for second- timers like administrative officer Linda Lim. The 56-year-old and her husband, who has retired, successfully applied for a five-room Jurong BTO flat last year, but are considering giving it up because of the dipping resale prices.
"Don't forget there's also the resale levy. It makes me want to be more careful," said Mrs Lim.
Depending on the owners' first subsidised flat type, they have to pay a resale levy of $15,000 to $50,000 when buying their second flat.
"I'm not sure if it's still worth getting a new flat with the levy and renovation fees," Mrs Lim said, adding she might give up her deposit of about $20,000 if her existing five-roomer's value plunges drastically.
Some second-timers have given up their new flats for other reasons.
Optician Freddy Go, 46, successfully applied for a Yishun BTO flat last November with his wife. But the couple cancelled their application after deciding to get a divorce.
Noting that his existing five-room flat in Woodlands is worth about $100,000 less compared to two years ago, Mr Go said he would probably think twice before selling it now. "If I sell, but there's not enough money to renovate my second flat, then how?"
But Mr Mak warned against such a wait-and-see approach: "Time is actually not on the owners' side in the short term. In the current market, the longer they wait, the lower the overall market prices." 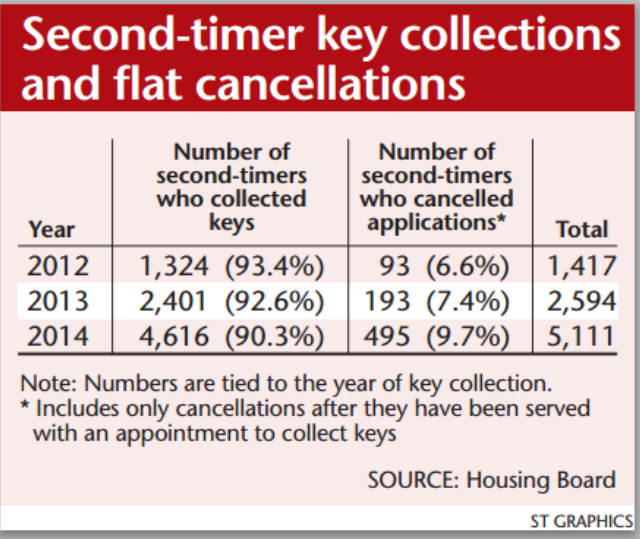