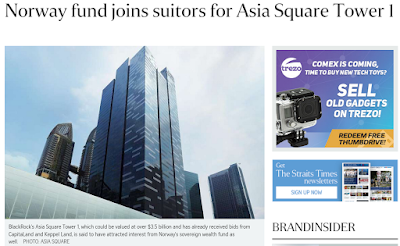 Norway's sovereign wealth fund is among bidders for BlackRock's Asia Square Tower 1, an office building in Singapore's central business district, according to people familiar with the matter.

CapitaLand, Singapore's largest developer, and Keppel Land have also made offers for the office tower, which could be valued at more than $3.5 billion, said the sources, who asked not to be identified.
BlackRock, the world's largest asset manager, said earlier this year that it had received expressions of interest for Asia Square Tower 1 and could get more than $4 billion for the building, whose tenants include Citigroup. BlackRock may also look to sell Asia Square Tower 2, Mr Greg Lapham, a real-estate managing director at the firm, said in June.
The two towers together are worth $7 billion, Mr Lapham said at the time, and the sale could be a club deal - in which several investors bid together - or could attract investors such as sovereign wealth or pension funds.
The agreement for Asia Square Tower 1 could be reached during the next 60 days, the sources said.
Mr Thomas Sevang, a spokesman for Norway's wealth fund, declined to comment.

As part of CapitaLand's normal course of business, the company evaluates and seeks accretive acquisitions, the developer said in an e-mailed response to queries. Representatives for BlackRock and Keppel did not immediately return Bloomberg requests for comment.
Norway's wealth fund, which is the world's biggest, gets its capital from the country's oil and gas production and its investment guidelines from the government. It is mandated to hold about 60 per cent in stocks, 35 per cent in bonds and 5 per cent in real estate.
The wealth fund said in March that it was making preparations for its first Asian real estate investment, narrowing its search to Singapore or Tokyo.
CapitaLand owns properties including homes, shopping malls, offices and services residences.
Singapore-based Keppel Land and its related companies have been active in the island state's office market over the past year or so as rents surged.
Singapore's office rents peaked in the first quarter as economic growth shows signs of tapering, according to Cushman & Wakefield Inc. Grade-A office rents in the central business district could slide 14 per cent over the next two years to $9.12 per square foot per month from $10.60 per square foot, Cushman estimates.
The Straits Times / Business                               Published on Wednesday, 26 August 2015
Norway fund joins suitors for Asia Sq Twr 1