Development charge rates for residential site to stay the same 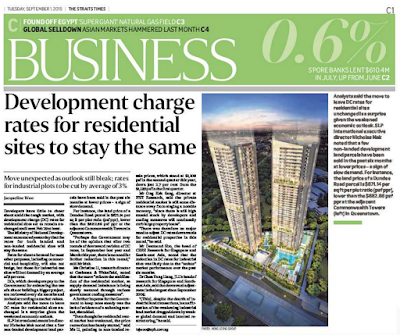 Move unexpected as outlook still bleak; rates for industrial plots to be cut by average of 3%


Developers have little to cheer about amid the tough market, with development charge (DC) rates for residential sites set to remain unchanged until next Feb 29 at least.

The Ministry of National Development announced yesterday that the rates for both landed and non-landed residential sites will stay the same.
Rates for sites to be used for most other purposes, including commercial and hospitality, will also not budge, but those for industrial use sites will be trimmed by an average of 3 per cent.
DCs, which developers pay to the Government for enhancing the use of a site or building a bigger project, are reviewed every six months and revised according to market values.
Analysts said the move to leave DC rates for residential sites unchanged is a surprise given the weakened economic outlook.
SLP International executive director Nicholas Mak noted that a few non-landed development land parcels have been sold in the past six months at lower prices - a sign of slow demand.
For instance, the land price of a Dundee Road parcel is $871.14 per sq ft per plot ratio (psf ppr), lower than the $882.86 psf ppr at the adjacent Commonwealth Towers in Queenstown.
"Perhaps the Government may be of the opinion that after two rounds of downward revision of DC rates, in September last year and March this year, there is no need for further reduction in this round," said Mr Mak.
Ms Christine Li, research director at Cushman & Wakefield, noted that the move "reflects the stabilisation of the residential market, as supply-demand imbalance is being slowly restored through various government cooling measures".
A further impetus for the Government to keep rates steady was the lack of evidence of a softening market, she added.
"Even though the residential rental market has weakened, the price correction has barely started," said Ms Li, pointing to non-landed resale prices, which stood at $1,108 psf in the second quarter this year, down just 2.7 per cent from the $1,139 psf in the first quarter.
Mr Ong Kah Seng, director at R'ST Research, said the private residential market is still some distance away from staging a notable recovery, "since there is still high unsold stock by developers and cooling measures will continually curb large property loans".
"There was therefore no major need to adjust DC rates downwards for residential properties in this round," he said.
Mr Desmond Sim, the head of CBRE Research for Singapore and South-east Asia, noted that the reduction in DC rates for industrial sites was likely due to the "sedate" market performance over the past six months.
Dr Chua Yang Liang, JLL's head of research for Singapore and South- east Asia, said the downward adjustment is the largest since September 2005.
"(This), despite the dearth of industrial land transactions, is an affirmation of the weakening industrial land market dragged down by weaker global demand and internal restructuring," he said.
The Straits Times / Business                                        Published on Tuesday, 1 Sept 2015               By  Josephine Woo                 Development charge rates for residential site to stay the same