From heartbreak to hopes of a new home 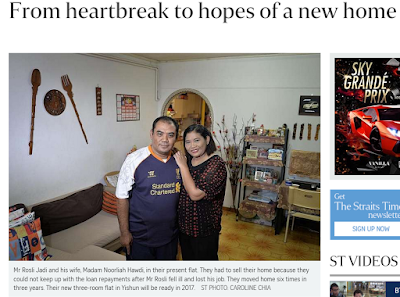 It's early on a weekday morning and Madam Noorliah Hawdi, 43, looks dressed for a party.

"Today is special," the factory worker says with a smile, her pink lipstick matching the large pink and white flowers emblazoned on her blouse. "I never thought we will own our home again."
Later that morning, Madam Noorliah, her husband Rosli Jadi, 44, and the youngest of their five children, Nur Syahidah, 11, head from their Siglap Interim Rental Housing (IRH) scheme flat to the Housing Board headquarters in Toa Payoh to sign the contract for their new apartment. The three-room unit in Yishun will be ready in 2017.
Ever since their five-room Yishun flat was taken away by the bank because of mounting arrears in 2009, the family of seven has had no permanent home. They moved six times in three years, staying with relatives, after putting their belongings in storage.
At one point, they stayed with 13 others in a three-room flat in Bedok, while their children continued attending school in Yishun. They tried renting a room with a cousin in Sengkang, but 17 people in a four-room flat did not work out.
When they were cash-strapped and unable to pay the $300 monthly fee for storage, all their belongings were forfeited. Losing the possessions of their past made her feel depressed about the future.
"At that time, I thought our financial situation would improve only when our kids started working," she says.
Tired of their nomadic existence, the couple appealed to the HDB for a rental flat and were referred to the Siglap IRH instead in September 2011. They now have two rooms in a four-room flat.
Their financial woes date back a decade. Mr Rosli was a construction safety supervisor but a knee operation in 2004 left him unable to work for a year. That happened just one year after they bought their five-room flat.
A bank gave them a loan even though Madam Noorliah worked part-time and they earned a combined income of only $2,000 a month. It was their third HDB flat. As the family grew, they had sold their smaller flats.
With Mr Rosli out of work, they lived off their savings and Madam Noorliah's pay of $700 a month as a factory worker. Soon they were falling behind on their monthly loan repayments.
Although Mr Rosli resumed work a year later, he earned around $1,600 a month. By 2009, they had fallen behind on mortgage payments to such an extent that the bank took away their flat.
At the IRH, social workers from Pave, a voluntary welfare organisation, helped them work through their financial woes and linked them with aid from the Social Service Office. The Workforce Development Agency (WDA) also helped them with training and, within a year, the couple secured full-time, better-paying jobs and their monthly family income increased to $3,300. They also began attending parenting workshops.
The HDB assessed the family's finances, including what the couple had in their CPF savings, and suggested that they buy a three-room flat which could be paid for through Mr Rosli's CPF savings.
"Getting Pave to talk to HDB about our problems really helped a lot," said Madam Noorliah. The once-quiet homemaker is a new woman now. She has taken up several courses through the WDA - the latest being a diploma in leadership - and is finally confident at work.
The biggest lesson she learnt, she says, is that hard work pays off. "I have better pay, I have my new diploma and will soon have my new flat," she says, beaming.
The couple recently set aside enough to celebrate their wedding anniversary for the first time.
These days, Madam Noorliah has become a regular volunteer at community-centre activities. "This community helped me," she says. "Now I want to give back."
The Straits Times / S'pore                                               Published on Monday, 31 August 2015
By Radha Basu                                                              From heartbreak to hopes of a new home