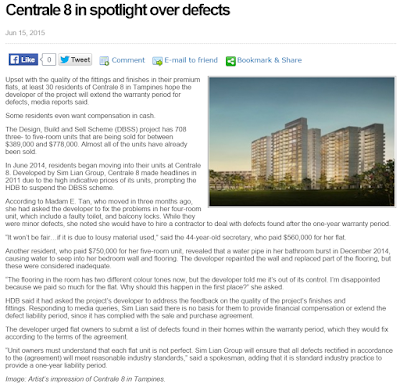 Upset with the quality of the fittings and finishes in their premium flats, at least 30 residents of Centrale 8 in Tampines hope the developer of the project will extend the warranty period for defects, media reports said.
Some residents even want compensation in cash.
The Design, Build and Sell Scheme (DBSS) project has 708 three- to five-room units that are being sold for between $389,000 and $778,000. Almost all of the units have already been sold.
In June 2014, residents began moving into their units at Centrale 8. Developed by Sim Lian Group, Centrale 8 made headlines in 2011 due to the high indicative prices of its units, prompting the HDB to suspend the DBSS scheme.
According to Madam E. Tan, who moved in three months ago, she had asked the developer to fix the problems in her four-room unit, which include a faulty toilet, and balcony locks. While they were minor defects, she noted she would have to hire a contractor to deal with defects found after the one-year warranty period.
“It won’t be fair…if it is due to lousy material used,” said the 44-year-old secretary, who paid $560,000 for her flat.
Another resident, who paid $750,000 for her five-room unit, revealed that a water pipe in her bathroom burst in December 2014, causing water to seep into her bedroom wall and flooring. The developer repainted the wall and replaced part of the flooring, but these were considered inadequate.
“The flooring in the room has two different colour tones now, but the developer told me it’s out of its control. I’m disappointed because we paid so much for the flat. Why should this happen in the first place?” she asked.
HDB said it had asked the project’s developer to address the feedback on the quality of the project’s finishes and fittings. Responding to media queries, Sim Lian said there is no basis for them to provide financial compensation or extend the defect liability period, since it has complied with the sale and purchase agreement.
The developer urged flat owners to submit a list of defects found in their homes within the warranty period, which they would fix according to the terms of the agreement.
“Unit owners must understand that each flat unit is not perfect. Sim Lian Group will ensure that all defects rectified in accordance to the (agreement) will meet reasonable industry standards,” said a spokesman, adding that it is standard industry practice to provide a one-year liability period.
Image: Artist’s impression of Centrale 8 in Tampines.
The Property Guru                                   Published on Monday, 15 June 2015
By Cheryl Marie Tay, Snr Journalist
Centrale 8 in spotlight over defects