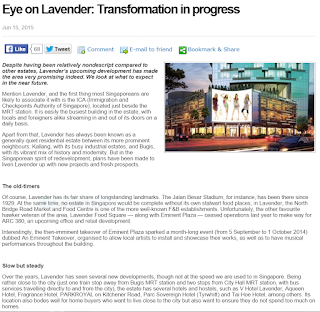 Despite having been relatively nondescript compared to other estates, Lavender’s upcoming development has made the area very promising indeed. We look at what to expect in the near future.
Mention Lavender, and the first thing most Singaporeans are likely to associate it with is the ICA (Immigration and Checkpoints Authority of Singapore), located just beside the MRT station. It is easily the busiest building in the estate, with locals and foreigners alike streaming in and out of its doors on a daily basis.
Apart from that, Lavender has always been known as a generally quiet residential estate between its more prominent neighbours: Kallang, with its busy industrial estates, and Bugis, with its vibrant mix of history and modernity. But in the Singaporean spirit of redevelopment, plans have been made to liven Lavender up with new projects and fresh prospects.

The old-timers
Of course, Lavender has its fair share of longstanding landmarks. The Jalan Besar Stadium, for instance, has been there since 1929. At the same time, no estate in Singapore would be complete without its own stalwart food places; in Lavender, the North Bridge Road Market and Food Centre is one of the more well-known F&B establishments. Unfortunately, the other favourite hawker veteran of the area, Lavender Food Square — along with Eminent Plaza — ceased operations last year to make way for ARC 380, an upcoming office and retail development.
Interestingly, the then-imminent takeover of Eminent Plaza sparked a month-long event (from 5 September to 1 October 2014) dubbed An Eminent Takeover, organised to allow local artists to install and showcase their works, as well as to have musical performances throughout the building.

Slow but steady
Over the years, Lavender has seen several new developments, though not at the speed we are used to in Singapore. Being rather close to the city (just one train stop away from Bugis MRT station and two stops from City Hall MRT station, with bus services travelling directly to and from the city), the estate has several hotels and hostels, such as V Hotel Lavender, Aqueen Hotel, Fragrance Hotel, PARKROYAL on Kitchener Road, Parc Sovereign Hotel (Tyrwhitt) and Tai Hoe Hotel, among others. Its location also bodes well for home buyers who want to live close to the city but also want to ensure they do not spend too much on homes.
As Eugene Lim, Key Executive Officer at ERA Realty Network, says: “Lavender is a city fringe location, and a short distance from both Orchard Road and the CBD.  If you find that a city-centre home is out of your budget, the next best option is a city-fringe home.”
A more recent introduction to the estate is Aperia, an integrated development with retail, F&B, lifestyle and business amenities. It is a mere five-minute walk from the MRT station, connected to Lavender Street by a sheltered linkway between the establishment and the Lavender Street bus stop. With a supermarket, eateries, a childcare centre and even a swimming pool and sky gardens, Aperia has certainly helped to transform Lavender.

On the up
Although the beloved Lavender Food Square, with its signature dim sum, wanton mee, beef noodles, popiah, char kway teow and carrot cake stalls, is now gone, ARC 380, which will take its place and that of Eminent Plaza, promises to bring the estate to new heights.
Two associated companies of Tong Eng Group, Prominent Site and Prominent Plaza Investments, are responsible for redeveloping the freehold site where Lavender Food Square and Eminent Plaza once stood, introducing ARC 380 to the neighbourhood. The project will boast 167 strata units, of which 144 will be office units within a 12-storey tower, and 23 will be retail units within a four-storey podium. Additionally, besides being within walking distance from Lavender MRT station on the East-West Line, it will also be close to the upcoming Bendemeer MRT station on the Downtown Line.
Lim says: “As an office-cum-retail development, ARC 380 will be one of the landmarks and the focal point of the estate, due to its location at the intersection of major roads, Jalan Besar and Lavender Street.”
Furthermore, ARC 380, whose expected TOP is on 31 December 2018, will represent a complete 180 from Eminent Plaza, which was known for its numerous spas and karaoke lounges. A restrictive covenant on titles for the retail units in ARC 380 prevents businesses such as amusement centres, bars, lounges, nightclubs, pubs, betting or moneylending outlets, cyber cafés, or funeral or massage parlours to operate on its premises.

Homely wisdom
Being a residential estate close to the city means homeowners looking to sell their properties have to strike a price balance. Lim advises: “For those looking to sell, realistic pricing is the key.  Today’s buyers are extremely price-sensitive, and if you were to overprice your property, you may be helping others who are selling in the location to find a buyer more quickly than you.”
As for home buyers, Lim encourages prudence: “The market is stable and sellers are under no significant pressure to cut prices.  Even though prices have been trending downwards, the decline has been very moderate.  So if you ask for a ridiculously low price, the seller will not take you seriously.”
He also predicts that the property market in Lavender is likely to rebound in the long term, whereupon the prices of homes in the city centre will act as a yardstick for the rest of the market, causing prices of homes in the city fringe to rise as well. Image: Artist’s impression of ARC 380 which is being built on the site of the former Eminent Plaza and Lavender Food Square.