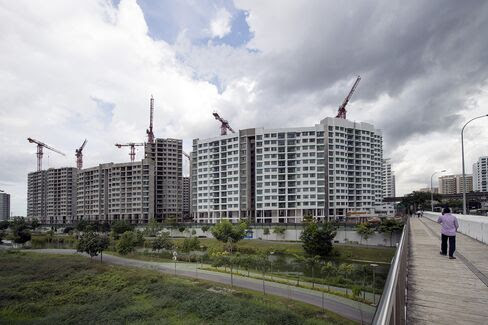 Singapore homebuyers will drive harder bargains in an already depressed housing market as new rules that require developers to disclose discounts and other perks unmask the actual value of properties for sale.


Starting Friday, the Urban Redevelopment Authority will publish weekly net prices on home transactions that will take into account incentives and rebates, such as those for stamp duties, to improve transparency.


“It will give homebuyers more bargaining opportunities,” said Donald Han, managing director at real estate broker Chesterton Singapore Pte. “Buyers are already asking for more perks, so this gives them additional information that they can use to negotiate a better price.”

Hefty furniture rebates became the subject of a S$181 million ($134 million) lawsuit in November after United Overseas Bank Ltd. claimed it was a “victim of a conspiracy” and handed out larger-than-permitted housing loans after some buyers at the luxury Marina Collection on Sentosa island didn’t declare perks that cut prices by as much as 34 percent.


Now, freebies such as luxury goods vouchers, jewelry and furniture used to entice homebuyers will be made public. Home sales dropped to a six-year low last year, while prices fell for a sixth straight quarter in the three months ended March 31, the longest losing streak in more than a decade.


Developers hard pressed to sell apartments have been peddling offers such as discounted prices on select units for a short time period, known as “star buys,” while others offer furniture rebates or luxury-goods vouchers amounting to about 1 percent to 2 percent of the transaction value.

While developers will be able to adjust their marketing because of the more detailed price information from competitors, they won’t lower prices indiscriminately, said Chia Siew Chuin, director of research and advisory at broker Colliers International.


Home sales have been hurt by the government’s campaign to cool property prices in Asia’s second-most expensive housing market. Measures since 2009 include a cap on debt repayment costs at 60 percent of a borrower’s monthly income and higher stamp duties and real estate taxes.


“Developers will become more competitive when everyone’s discount is disclosed,” said Xian Yang Wong, manager of research and consultancy at property brokerage OrangeTee, who estimates the discounts range between 10 percent and 15 percent. It “will be good for the market.”


UOB was approached by agents to provide housing loans for 38 units at the Marina Collection. Of these, 37 have defaulted. The bank accused Indonesian tycoon Mochtar Riady’s Lippo Marina Collection Pte of being the main beneficiary along with seven others from the sale of apartments at the 124-unit condominium.

The developer said in court papers such rebates are a “common sales” strategy and denied deceiving the bank. Lippo said it wasn’t involved in financing of the units and UOB’s decision to grant loans should be based on its own checks. UOB’s lawyer Eddee Ng declined to comment.
Lippo said it dealt with the buyers only through the property agent who asked for discounts in the form of furniture rebates. The developer agreed to give rebates of between 25 percent and 34 percent to promote the sale of units, adding that this was a “fairly common sales and marketing strategy.”
“It is for UOB to answer for how it ended up granting loans totaling more than S$181 million to customers who do not seem to have had the ability to repay these loans,” Siraj Omar, Lippo Marina’s lawyer said.

Developers have been reporting net prices on monthly sales since 2013. Failure to comply with the reporting rules may include license revocation and suspension. Other new rules in the Housing Developers Bill may include a maximum fine of S$100,000 and a jail term for as long as three years.
“URA is just filling the gap in the reporting,” said Alan Cheong, a Singapore-based director at broker Savills Plc. “There is this suspicion that developers are giving out hefty discounts, but it’s not true. Those are one-off cases.”
The latest rules will force developers to price the homes competitively when they start marketing new projects, said Alice Tan, Singapore-based head of consultancy and research at brokerage Knight Frank. She estimates discounts will range from 3 percent to 8 percent.
“In light of the weak market, developers need to get the price right at the start, in order to garner immediate interest from buyers,” Tan said.
Bloomberg Business                                 Published on Friday, 5 June 2015
By Pooja Thakur Mahrotri and Andrea Tan
Singapore Homebuyers to Seek Bargains on Discount Disclosure