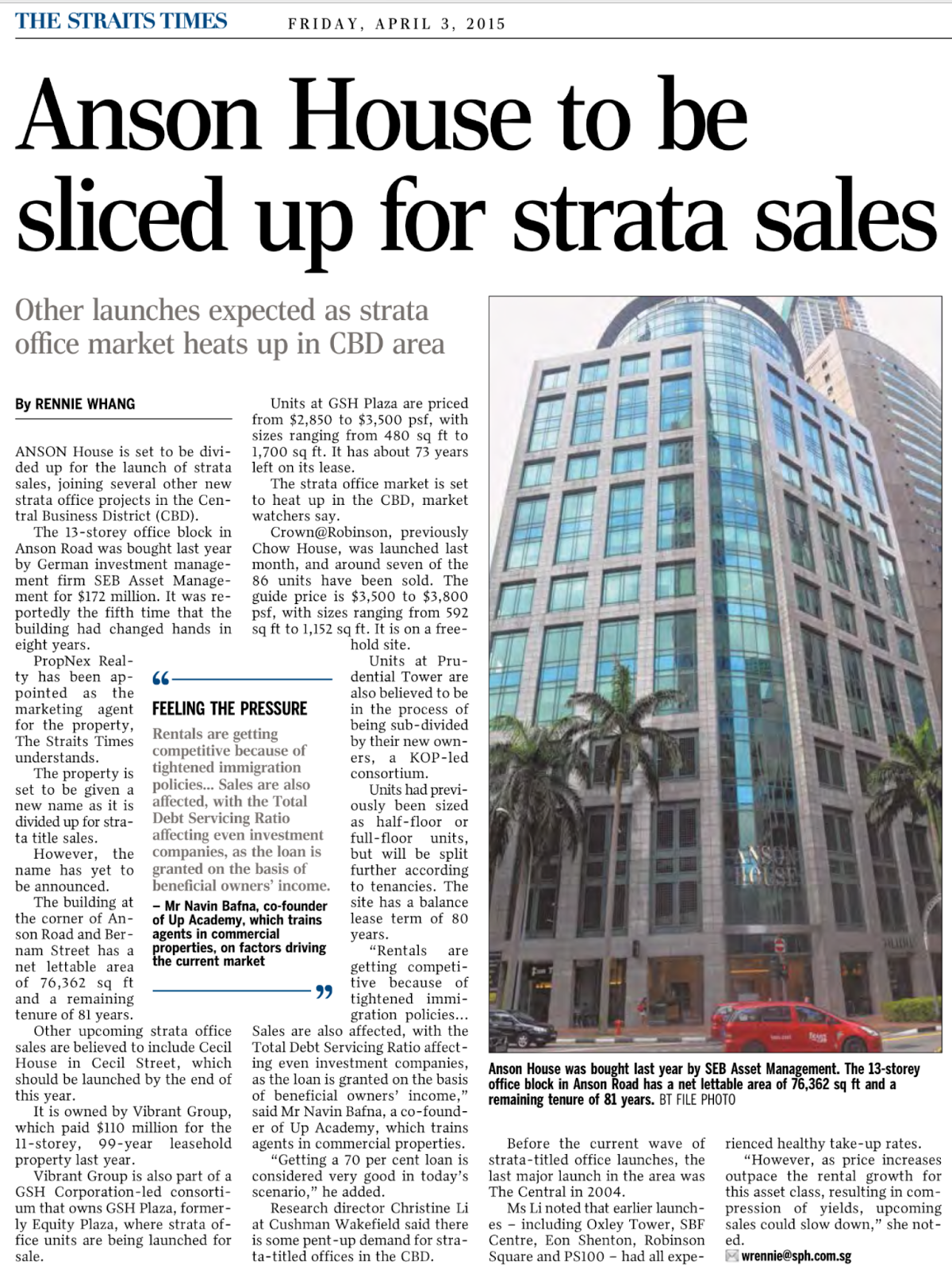 ANSON House is set to be divided up for the launch of strata sales, joining several other new strata office projects in the Central Business District (CBD).

The 13-storey office block in Anson Road was bought last year by German investment management firm SEB Asset Management for $172 million. It was reportedly the fifth time that the building had changed hands in eight years.

PropNex Realty has been appointed as the marketing agent for the property, The Straits Times understands.

The property is set to be given a new name as it is divided up for strata title sales.
However, the name has yet to be announced.

The building at the corner of Anson Road and Bernam Street has a net lettable area of 76,362 sq ft and a remaining tenure of 81 years.

Other upcoming strata office sales are believed to include Cecil House in Cecil Street, which should be launched by the end of this year.

It is owned by Vibrant Group, which paid $110 million for the 11-storey, 99-year leasehold property last year.

Vibrant Group is also part of a GSH Corporation-led consortium that owns GSH Plaza, formerly Equity Plaza, where strata office units are being launched for sale.

The strata office market is set to heat up in the CBD, market watchers say.

Units at Prudential Tower are also believed to be in the process of being sub-divided by their new owners, a KOP-led consortium.

Units had previously been sized as half-floor or full-floor units, but will be split further according to tenancies. The site has a balance lease term of 80 years.

"Rentals are getting competitive because of tightened immigration policies... Sales are also affected, with the Total Debt Servicing Ratio affecting even investment companies, as the loan is granted on the basis of beneficial owners' income," said Mr Navin Bafna, a co-founder of Up
Academy, which trains agents in commercial properties.

"Getting a 70 per cent loan is considered very good in today's scenario," he added.

Research director Christine Li at Cushman Wakefield said there is some pent-up demand for strata-titled offices in the CBD.

Before the current wave of strata-titled office launches, the last major launch in the area was The Central in 2004.

"However, as price increases outpace the rental growth for this asset class, resulting in
compression of yields, upcoming sales could slow down," she noted.