Twenty 5-roomers go for $900,000 or more despite overall downtrend 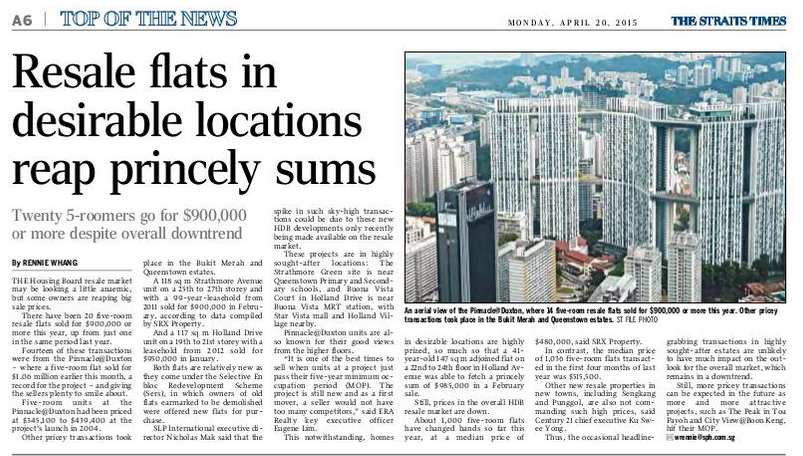 An aerial view of the Pinnacle@Duxton, where 14 five-room resale flats sold for $900,000 or more this year. Other pricey

THE Housing Board resale market may be looking a little anaemic, but some owners are reaping big sale prices.

There have been 20 five-room resale flats sold for $900,000 or more this year, up from just one in the same period last year.
Fourteen of these transactions were from the Pinnacle@Duxton - where a five-room flat sold for $1.06 million earlier this month, a record for the project - and giving the sellers plenty to smile about.
Five-room units at the Pinnacle@Duxton had been priced at $345,100 to $439,400 at the project's launch in 2004.
Other pricey transactions took place in the Bukit Merah and Queenstown estates.
A 118 sq m Strathmore Avenue unit on a 25th to 27th storey and with a 99-year-leasehold from 2011 sold for $900,000 in February, according to data compiled by SRX Property.
And a 117 sq m Holland Drive unit on a 19th to 21st storey with a leasehold from 2012 sold for $950,000 in January.
Both flats are relatively new as they come under the Selective En bloc Redevelopment Scheme (Sers), in which owners of old flats earmarked to be demolished were offered new flats for purchase.
SLP International executive director Nicholas Mak said that the spike in such sky-high transactions could be due to these new HDB developments only recently being made available on the resale market.
These projects are in highly sought-after locations: The Strathmore Green site is near Queenstown Primary and Secondary schools, and Buona Vista Court in Holland Drive is near Buona Vista MRT station, with Star Vista mall and Holland Village nearby.
Pinnacle@Duxton units are also known for their good views from the higher floors.
"It is one of the best times to sell when units at a project just pass their five-year minimum occupation period (MOP). The project is still new and as a first mover, a seller would not have too many competitors," said ERA Realty key executive officer Eugene Lim.
This notwithstanding, homes in desirable locations are highly prized, so much so that a 41- year-old 147 sq m adjoined flat on a 22nd to 24th floor in Holland Avenue was able to fetch a princely sum of $985,000 in a February sale.
Still, prices in the overall HDB resale market are down.
About 1,000 five-room flats have changed hands so far this year, at a median price of $480,000, said SRX Property.
In contrast, the median price of 1,036 five-room flats transacted in the first four months of last year was $515,500.
Other new resale properties in new towns, including Sengkang and Punggol, are also not commanding such high prices, said Century 21 chief executive Ku Swee Yong.
Thus, the occasional headline- grabbing transactions in highly sought-after estates are unlikely to have much impact on the outlook for the overall market, which remains in a downtrend.
Still, more pricey transactions can be expected in the future as more and more attractive projects, such as The Peak in Toa Payoh and City View@Boon Keng, hit their MOP.
The Straits Times / Top of the News           Published on Monday, 20 April 2015
By Rennie Whang                                       wrennie@sph.com.sg