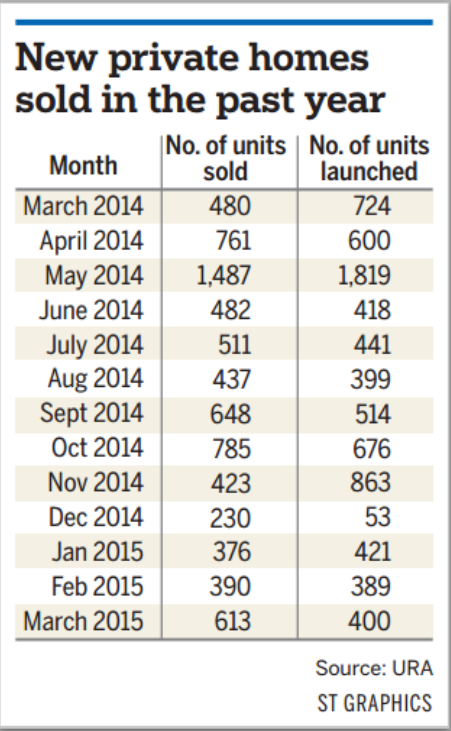 New Private homes sold in the past year

NEW private homes sales picked up last month following a lull over the Christmas and Chinese New Year periods but buyer interest remains patchy.
Developers sold 613 residences last month while 400 units were launched, according to the Urban Redevelopment Authority yesterday. This was a 57.2 per cent jump in sales from February, when 390 units were sold and 389 launched.
Last month's numbers took first-quarter sales to 1,379 units, around the same level recorded in the fourth quarter last year, said JLL national research director Ong Teck Hui. "This indicates a stabilisation of new home sales volume over two quarters. The question of whether volumes have bottomed out will be something to look out for."
Last month's surge could be for seasonal reasons as buyers resumed house-hunting after the Chinese New Year festivities.
Recent increases in key interest rates may have hastened the decision-making process as well, analysts said.
A substantial 43 per cent of new home sales came from two recently launched projects, noted SLP International executive director Nicholas Mak.
Kingsford Waterbay, which was launched last month, led the way with 155 sales at a median price of $1,111 per sq ft (psf). Sims Urban Oasis, which was launched in February, sold 107 units at a median price of $1,401 psf.
While transactions at older launches were more muted, the top 15 best-selling projects all managed double-digit sales, something that has not been seen since October last year, said OrangeTee research manager Wong Xian Yang. Prices did not seem to have been trimmed.
However, market talk is that Sims Urban Oasis developer GuocoLand increased agent sales commissions last month in a bid to move more homes.
"As at the end of last month, 20 per cent of the project's 1,024 units were sold... It is important for the developer to maintain the sales momentum before other new launches start drawing away potential buyers," Mr Mak said.
As in previous months, the suburbs accounted for most of the new private home sales, with 391 units or 63.8 per cent of the total. The city fringes accounted for 32.1 per cent and the central region, just 4.1 per cent.
"Affordability remains a critical factor for buyers, who have been hamstrung by the cooling measures," said JLL's Mr Ong.
Median prices at suburban projects last month were on average 22 per cent below those in the city fringes and 43 per cent lower than in the central region, Mr Ong said. Popular projects in the suburbs included The Skywoods, which sold 27 units at a median price of $1,186 psf, and Symphony Suites, which sold 20 units at a median price of $1,016 psf.
Sales numbers are expected to be up as well this month as developers look to launch projects before the Hungry Ghost Festival in August, said PropNex chief Mohd Ismail Gafoor. Projects launched this month - Botanique and North Park Residences - have seen brisk sales.
But headwinds will persist, including the continued enforcement of cooling measures, a mounting supply of new homes, a weakening leasing market and an impending rise in interest rates, he said.
Private rents posted a 0.4 per cent month-on-month drop last month, or a 6.3 per cent year-on-year fall, according to data from SRX Property yesterday.
Mr Desmond Sim, CBRE research head for Singapore and South-east Asia, noted first-quarter figures point to sales reaching 5,000 to 6,000 units this year.
"These levels are similar to the recession years of 1997 and 1998, or during the Asian financial crisis; 2003 and 2004 during the Sars (severe acute respiratory syndrome) outbreak; and 2008 following the Lehman Brothers collapse."
There is a "strong need for the Government to review the sluice gate of measures" for market volumes to return to the 10,000 to 12,000 yearly average. It could take up to three years to manage the 21,000 unsold units now on the market, he added.