Artists' impressions of Raffles Medical's $120 million mall at Holland Village (above), of which 9,000 sq ft will be used as a medical facility, and the $310 million Raffles Hospital extension. The 20-storey tower is due for completion by the first quarter of 2017. -- PHOTOS: RAFFLES MEDICAL GROUP

RAFFLES Medical Group will open a new facility in Shaw Centre in June that will provide a wide range of services, it announced yesterday.
The 17,000 sq ft outpatient centre, which will occupy two floors, is costing the firm $3 million to renovate.
It will house a general practice department and provide family medicine, dental care and health-screening as well as specialist services, such as obstetrical and gynaecological care.
Raffles Medical added that its Chinese medicine unit will also open a clinic in the centre which will be its first outside Raffles Hospital.
Executive chairman Loo Choon Yong noted at the firm's results briefing yesterday that the location was a "focal point" for both Singaporeans and foreigners.
The new centre is not the only area of expansion. The firm's 9,000 sq ft facility at Holland Village is due to be completed in the first quarter of next year and it opened a new family medicine and dental clinic at Eastpoint Mall yesterday, said Dr Loo.
It is also expanding its facilities within Raffles Hospital itself.
Dr Loo said a 34,000 sq ft space on the 10th floor that had previously been used as a research centre by pharmaceutical company Pfizer has been reclaimed to house specialist clinics and the firm's first bone marrow transplant centre.
This expansion is in addition to the $310 million extension to Raffles Hospital, which is scheduled to be completed by the first quarter of 2017.
Under an agreement with the Ministry of Health, Raffles Hospital's emergency department will begin receiving patients from Singapore Civil Defence Force emergency ambulances by the middle of this year.
The new facilities will allow the firm to build on what was a solid first quarter, with net profit up 2.9 per cent to $15 million over the same period a year earlier, while revenue rose 8.5 per cent to a record $95 million.
This is the highest first-quarter revenue achieved by the group.
All the company's divisions contributed to the growth. Revenue from the healthcare division increased by 13.7 per cent, while turnover hospital services rose 6.2 per cent.
This was because of its growing primary care network and its addition of more specialists in endocrinology, plastic surgery and haematology.
Raffles Medical has recruited 33 doctors, 44 nurses and 44 ancillary workers as part of its new developments.
Earnings per share stood at 2.65 cents, up from 2.63 cents in the first quarter of last year, while net asset value per share rose to 98.44 cents from 95.50 cents as at Dec 31. No dividend was declared. 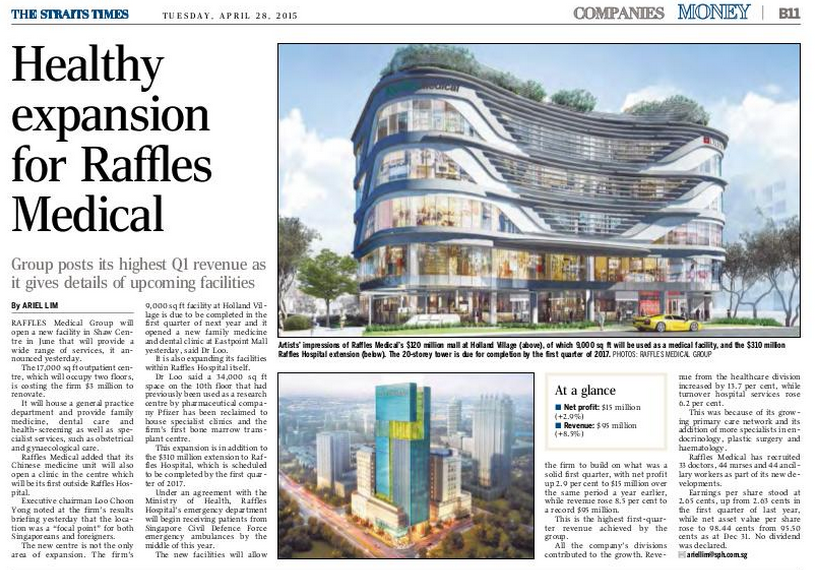