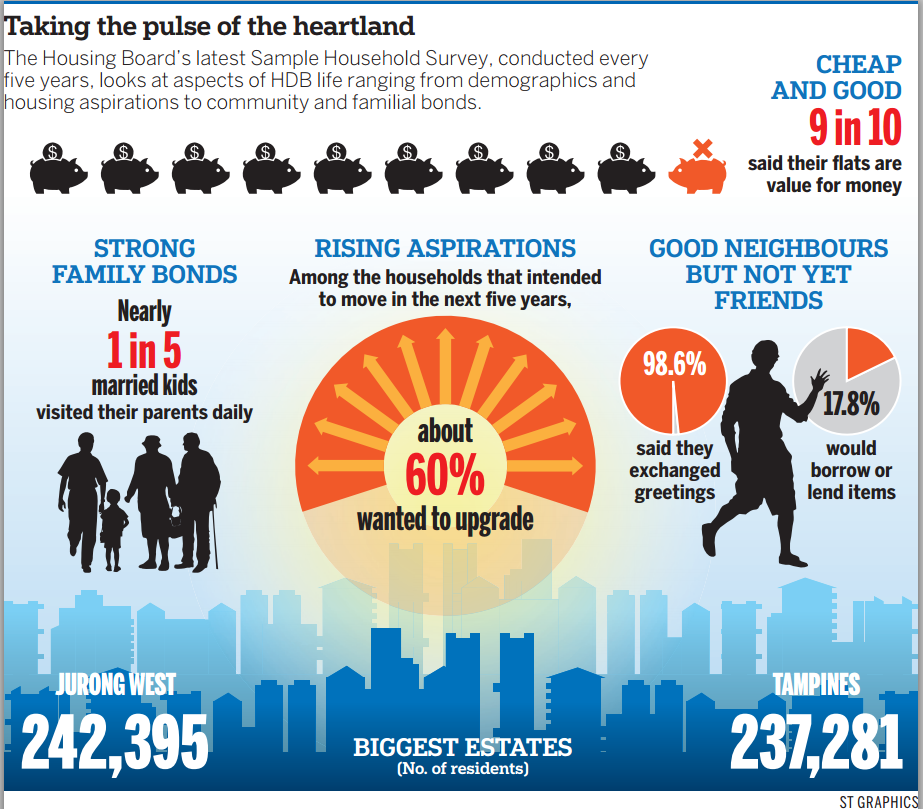 Taking the pulse of the Heartland

YOUNG couples are more likely to start their married life in a rented flat, with one in five of those aged younger than 35 doing so.
But those who do buy flats are less likely to get smaller ones, compared to older households, according to the Housing Board's (HDB) latest Sample Household Survey.
Conducted every five years, the latest report surveyed 7,800 HDB households in 2013.
Of these, almost nine in 10 heads of households were or had at some point been married.
And for 21.2 per cent of those younger than 35, the first place they lived in after marriage was a rented flat or private property.
This is higher than the overall average of 15.2 per cent, and also higher than most other cohorts.
For household heads aged 35 to 44, for instance, only 17.2 per cent lived in rented property upon getting married.
Experts said that renting is an affordable way to "live the high life", at least for a few years.
Some young couples might want to live in a mature estate or in a condominium with facilities, said OrangeTee research manager Wong Xian Yang.
With the young valuing privacy highly, some might also be renting while waiting for their Build-To-Order HDB flats to be ready. "They feel that so long as their budget can accommodate it, they would like to rent a small flat to have their own living space, compared to being cramped with the in-laws," said R'ST Research director Ong Kah Seng.
The figures refer to units rented on the open market. Separately, 4.7 per cent of young households started married life on the HDB public rental scheme, which is for the low-income.
But for most households, a purchased flat was the most common housing type upon marriage.
Three-roomers have become less common as a starting home for younger couples. They were the first housing type for 9.6 per cent of young households, compared to 11.2 per cent for those with household heads aged 35 to 44, and 19.2 per cent overall.
The proportion of young households with four- and five-roomers as a first home was higher than the average, though lower than their older counterparts in the 35 to 44 age range.
Also, of all age groups, young households were most likely to have an executive flat as their first home, with 3.2 per cent having one. The overall average was 2.1 per cent.
Younger couples might be less keen on three-roomers because aspirations have risen and incomes are higher, said Mr Ong.
Straits Times / Top of The News                  Published on Thursday, 16 April 2015
By Janice Heng                                                               janiceh@sph.com.sg

Taking the pulse of the heartland