EXECUTIVE condominium (EC) buyers look set to be spoilt for choice with up to seven of this popular style of housing headed for market in the rest of the year.
However, many of these new projects will be near or even next to existing or upcoming EC sites, which presents challenging conditions for developers. ECs are a hybrid of public and private housing. The possible launches are in Westwood Avenue, Canberra and Sembawang, Anchorvale Crescent, Choa Chu Kang Grove and Yishun.
They could add about 4,600 units to an EC market that was already grappling with about 2,130 unsold units as at the end of last month.
Experts note that while developers have been hanging on to average prices of about $800 per sq ft, demand has been weak.
"If the new launches this year are still going to be priced around such levels, we may expect slow take-up as we have seen (so far)," said Mr Ong Teck Hui, JLL national research director. 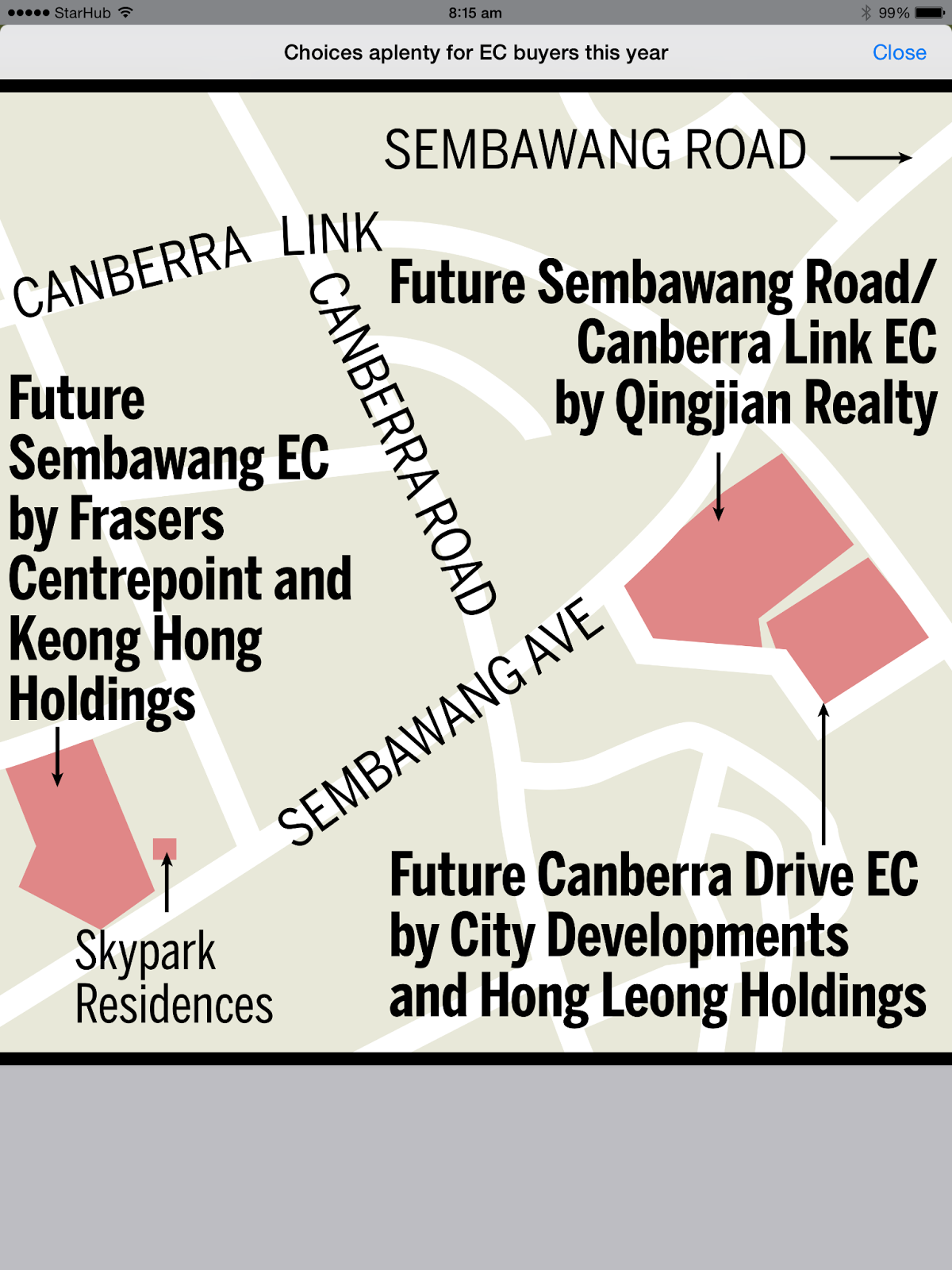 At recent launches, including Bellewoods, Bellewaters, The Terrace and The Amore, median prices at launch varied from $795 psf to $813 psf. As at the end of March, their take-up rates were 22 per cent to 34 per cent.
Pricing to sell would mean that developers must offer the units significantly below the price of condos, while benchmarking themselves against falling Housing Board resale prices to cater to second-timers, said Mr Ku Swee Yong, Century 21 chief executive.
"First-time buyers would also be referencing resale condo prices. Even if an EC is launched at $750 psf, a neighbouring condo - with no restrictions, but also no government grants - could be about $750 psf as well."
As a result, developers of ECs will have to price units attractively relative to these other segments which are all trending down.
HDB resale prices have dropped about 11.1 per cent since their peak in April 2013, while condo resale prices are down about 6.2 per cent from a peak in January 2014, going by SRX Property's March flash estimates. Many of the ECs which could be launched this year are in the north and north-east.
One EC site in Sembawang - won in July last year by a tie-up between units of Frasers Centrepoint and Keong Hong Holdings - is next to Skypark Residences EC. The latter project, by JBE Holdings and Keong Hong Holdings, was launched in September 2013 and has 142 unsold units.
In Yishun, a tie-up between units of City Developments and Hong Leong Holdings is set to slug it out with JBE Holdings over two adjacent sites in Street 51.
In Anchorvale Crescent, The Vales EC by SingHaiyi Group, a 517-unit project, which has not yet been launched, is near Bellewaters EC, which had 430 unsold units at end-March.
Competition could worsen as another nearby site in Anchorvale Crescent was won by Sim Lian Land in February this year. A further estimated 2,055 EC units could be added next year, based on land sales so far, said Mr Ong Kah Seng, R'ST Research director. 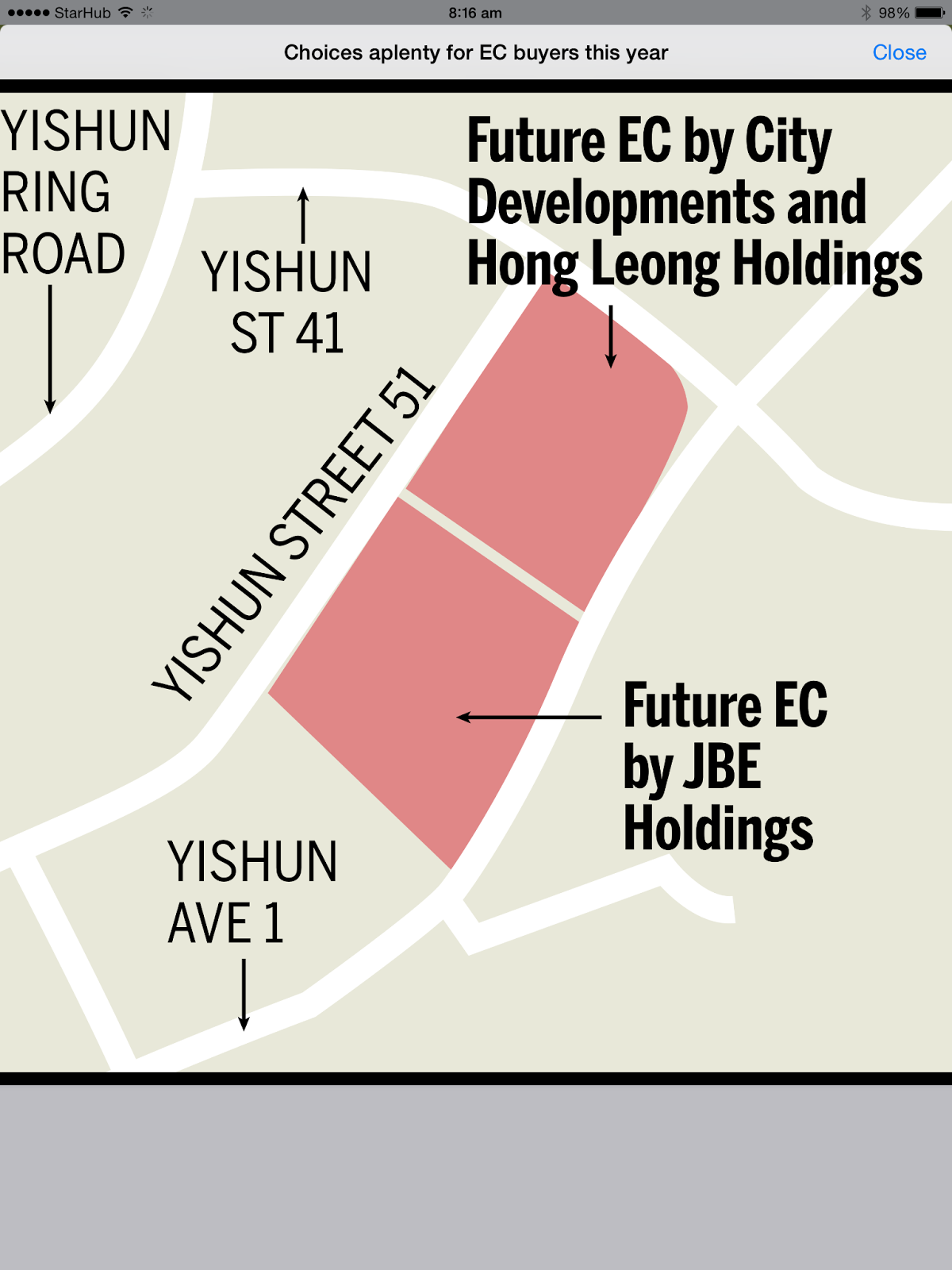 But EC land prices are trending down, with a consensus among developers seeming to emerge this year that these should be less than $300 psf per plot ratio (ppr), he added. This is down from less than $400 psf ppr last year, with most top land bids around $350 psf ppr then.
Buyers are expecting the two EC sites sold this year so far - the Anchorvale Crescent site, and another in Woodlands Avenue 12 - to be launched next year at reduced prices of as low as $720 psf.
Launch prices for projects in the coming months will likely be a touch above that level, at $750 to $770 psf, down from today's prices, said Mr Ong.
An exception, however, could be Westwood Residences in Westwood Avenue in Boon Lay, for which e-applications could begin next month. Apart from Lake Life, no other ECs have been introduced to the Jurong area since 2010. This could mean buyer interest, even at slightly higher prices.
wrennie@sph.com.sg
By Rennie Whang
Straits Times
Published on Apr 18, 2015 1:03 AM - Saturday