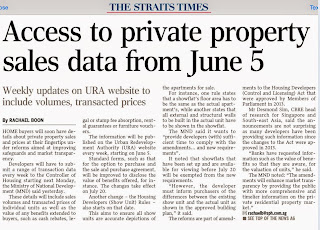 HOME buyers will soon have details about private property sales and prices at their fingertips under reforms aimed at improving safeguards and market transparency.
Developers will have to submit a range of transaction data every week to the Controller of Housing starting next Monday, the Ministry of National Development (MND) said yesterday.
These details will include sales volumes and transacted prices of individual units as well as the value of any benefits extended to buyers, such as cash rebates, legal or stamp fee absorption, rental guarantees or furniture vouchers.
The information will be published on the Urban Redevelopment Authority (URA) website every week, starting on June 5.
Standard forms, such as that for the option to purchase and the sale and purchase agreement, will be improved to disclose the value of benefits offered, for instance. The changes take effect on July 20.
Another change - the Housing Developers (Show Unit) Rules - also starts on that date.
This aims to ensure all show units are accurate depictions of the apartments for sale.
For instance, one rule states that a showflat's floor area has to be the same as the actual apartment's, while another states that all external and structural walls to be built in the actual unit have to be shown in the showflat.
The MND said it wants to "provide developers (with) sufficient time to comply with the amendments... and new requirements".
It noted that showflats that have been set up and are available for viewing before July 20 will be exempted from the new requirements.
"However, the developer must inform purchasers of the differences between the existing show unit and the actual unit as shown in the approved building plan," it said.
The reforms are part of amendments to the Housing Developers (Control and Licensing) Act that were approved by Members of Parliament in 2013.
Mr Desmond Sim, CBRE head of research for Singapore and South-east Asia, said the announcements are not surprising as many developers have been providing such information since the changes to the Act were approved in 2013.
"Banks have requested information such as the value of benefits so that they are aware, for the valuation of units," he said.
The MND noted: "The amendments will enhance market transparency by providing the public with more comprehensive and timelier information on the private residential property market."

Private property, developments and commercial buildings as seen from Scotts Road. Home buyers will soon have details about private property sales and prices at their fingertips under reforms aimed at improving safeguards and market transparency. -- PHOTO: ST FILE
The Straits Times / Top of The News                  Published on Tuesday, 19 May 2015
rachaelb@sph.com.sg
Access to private property sale data from 5 June, 2015