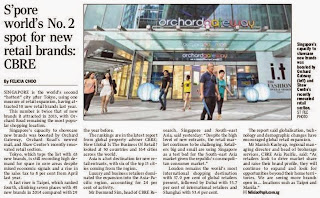 SINGAPORE is the world's second "hottest" city after Tokyo, using one measure of retail expansion, having attracted 58 new retail brands last year.
This number is twice that of new brands it attracted in 2013, with Orchard Road remaining the most popular shopping location.
Singapore's capacity to showcase new brands was boosted by Orchard Gateway, Orchard Road's newest mall, and Shaw Centre's recently renovated retail section.
Tokyo, which tops the list with 63 new brands, is still recording high demand for space in core areas despite mixed economic signals and a rise in the sales tax to 8 per cent from April last year.
A fast riser is Taipei, which ranked fourth, climbing seven places with 49 new brands in 2014 compared with 29 the year before.
The rankings are in the latest report from global property adviser CBRE; How Global Is The Business Of Retail? looked at 50 countries and 164 cities across the world.
Asia is a hot destination for new retail entrants, with six of the top 15 cities coming from the region.
Luxury and business retailers dominated the expansion into the Asia-Pacific region, accounting for 24 per cent of activity.
Mr Desmond Sim, head of CBRE Research, Singapore and South-east Asia, said yesterday: "Despite the high level of new entrants, the retail market continues to be challenging. Retailers big and small are using Singapore as a test bed for the South-east Asia market given the republic's cosmopolitan consumer market."
London remains the world's most international shopping destination with 57.9 per cent of global retailers present, followed by Dubai with 55.7 per cent of international retailers and Shanghai with 53.4 per cent.