'Time is ripe' for S'pore investors to step into Mongolia. Opportunities abound in areas like property, finance: Real estate boss 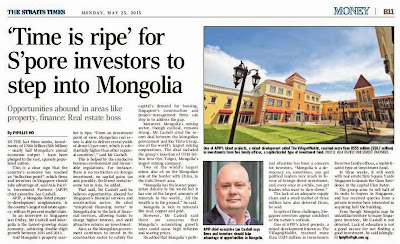 IN THE last three weeks, investments of US$6 billion (S$8 billion) - nearly half Mongolia's annual economic output - have been pledged to the vast, sparsely populated nation.
This is a clear sign that the country's economy has reached an "inflection point", which firms and investors in Singapore should take advantage of, said Asia Pacific Investment Partners (APIP) chief executive Lee Cashell.
APIP, a Mongolia-listed property-development conglomerate, is the country's largest real estate agency, with an 85 per cent market share.

APIP chief executive Lee Cashell says firms and investors should take advantage of opportunities in Mongolia.
In an interview in Singapore last Friday, Mr Cashell said Mongolia is the fastest-growing Asian economy, achieving double-digit growth between 2011 and 2013.
And Mongolia's property market is ripe. "From an investment point of view, Mongolian real estate is able to deliver rental yields of about 12 per cent, which is substantially higher than other regional countries'," said Mr Cashell.
This is helped by the conducive business environment and favourable regulations. For instance, there is no restriction on foreign investment, no capital gains tax and, possibly, the lowest rental income tax in Asia, he added.
That said, Mr Cashell said he believes opportunities abound for Singapore's financial services and construction sector. He cited "mispriced financing terms" in Mongolia due to the lack of financial services, allowing banks to charge higher interest, and yield attractive returns on investment.
Also, as the Mongolian government continues to invest in its construction sector to satisfy the capital's demand for housing, Singapore's construction and project-management firms can step in to address the gap.
Moreover, Mongolia's mining sector, though cyclical, remains strong. Mr Cashell cited the recent deal between the Mongolian government and Rio Tinto Group, one of the world's largest mining corporations. The deal included the group's injection of US$5 billion into Oyu Tolgoi, Mongolia's largest mining company.
Two of the world's largest mines also sit on the Mongolian side of the border with China, in the Gobi Desert area.
"Mongolia has the lowest population density in the world but it has one of the largest amounts of minerals in the world... All the wealth is in the ground," he said.
Mongolia is rich in minerals like coal, copper and gold.
However, Mr Cashell said there are concerns that Mongolia's astonishing growth rates could cause high inflation and soaring prices.
He added that Mongolia's political situation has been a concern for investors. "Mongolia is a democracy so, sometimes, you get political leaders very much in favour of foreign direct investment, and, every once in a while, you get leaders who want to slow down."
The lack of an adequate supply chain and a small market of three million have also deterred firms, he said.
In spite of these challenges, Singapore investors appear confident of the nation's outlook.
One of APIP's latest projects, a mixed development known as The Village@Nukht, received more than US$5 million in investments from two family offices, a sophisticated type of investment fund.
In three weeks, it will work with real estate firm Square Yards Singapore to launch the Oasis Residence in the capital Ulan Bator.
The group aims to sell half of its units to buyers in Singapore, and has received queries from a private investor here interested in acquiring half the building.
Even though Mongolia may be unfamiliar territory to many Singapore investors, Mr Cashell is not deterred. Lack of education is not a good excuse for not finding a good investment, he said jokingly.
The Straits Times / Money                                  Published on Monday, 25 May 2015
By Phyllis Ho                                                      hphyllis@sph.com.sg