Artists' impressions of Damansara City. The development features two 28-storey residential towers, two office towers, a five-star hotel and a mall. The project is expected to be completed by the end of this year. -- PHOTOS: GUOCOLAND MALAYSIA


DEVELOPER GuocoLand Malaysia has launched the latest tranche of units in a mixed-use project being built in the posh area of Damansara Heights in Kuala Lumpur.
Damansara City, which is about 5km from the city centre, features two 28-storey residential towers, two office towers, a five-star hotel and a mall.
The residential towers, known as DC Residency, will have a total of 370 units, ranging from one-bedders of 899 sq ft each to three-bedroom apartments with a utility room totalling 2,705 sq ft.
Prices start at RM1,600 (S$593) per sq ft but special incentives will be offered at this weekend's pre-launch sale of 60 units from tower one, the company officials said.
The project is expected to be completed by the end of this year.
GuocoLand Malaysia managing director Tan Lee Koon said half of the units from the first tower have already been sold via private placement, with about 30 per cent of the buyers from Singapore.
The estimated rental yield is between 5 per cent and 6 per cent. Damansara City is expected to serve a population of around 10,000 in the vicinity, so the prospective tenant pool should be a large one, he said. It targets those who would be working in and around the Petronas Twin Towers in the Kuala Lumpur city centre, for example.
Mr Tan said DC Residency is the only new high-rise project that will be completed in the Damansara Heights area over the next three years. The Sungai Buloh-Jalan Semantan MRT line is being built next to Damansara City.
Due to its strong investment potential, it is also the only residential development to be registered as an Entry Point Project under Malaysia's Economic Transformation Programme, he said.
Such projects are seen as playing a significant role towards raising the level of development within an area.
Mr Tan added that the upcoming Singapore-Kuala Lumpur high-speed rail link will also boost the project's appeal to buyers from the Republic.
The pre-launch sale will be held at The Island Suite at Marina in Keppel Bay over the weekend between 11am and 7pm. 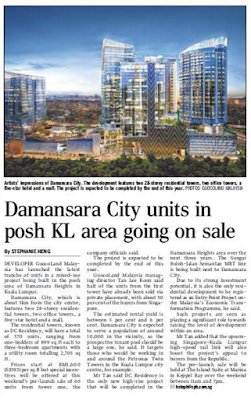