Compensation is a major issue; no alternative site for golf course

Jurong Country Club will have to vacate its 67ha site for the high-speed rail terminus by November next year. -- PHOTO: JURONG COUNTRY CLUB

SO CONFIDENT were members that the 40-year-old Jurong Country Club (JCC) would stay on its current site for a long time that they splurged $24 million on a makeover.
As the club, with its 18-hole golf course, prepares to vacate its 67ha site by November next year for the high-speed rail terminus, it faces several questions.
How much the club will be compensated for the land and how much each of the 2,700 members will receive is still unclear.
The club's president, Mr Bobby Wee, said: "Right now, we've put together a task force comprising five committee members to work with the authorities. We'll see where we can go from here."
He added that they were notified by the Government only yesterday morning.
A meeting with the Singapore Land Authority (SLA) is expected to take place in about two weeks' time, said a source from the club who did not want to be named.
While the SLA said yesterday that it will not be providing the club with an alternative site for a golf course, it has not ruled out offering it a site to host a club without golfing facilities.
Now, 60 per cent of the club's members are golfing members and the rest are social members.
Given that the club's lease for the site is till 2035, the acquisition announcement yesterday no doubt came as a shock to key executives and members.
Mr Ross Tan, the club's captain, said: "It's too sudden. We know that the club is standing in the way of prime developments in the future. But we never expected this to happen so soon."
Most members interviewed said one reason why the club members supported a $24 million renovation in 2010 was the club's long lease.
Noting that there were further proposals to build a new clubhouse lobby and golfers' terrace, and to refurbish changing rooms soon, Ms Shelley Yeo, 61, a housewife, said: "I was actually looking forward to the upgrades."
Other members were concerned about the compensation amount they might receive.
Retiree Bob Wong, 68, who had paid about $150,000 some 30 years ago to be a member, said he will be losing out and hopes to get some form of compensation.
Dr Wilson Chew, 44, who bought his membership for about $50,000 three years ago, said: "Proceeds from the land acquisition should be distributed to the members. I hope the compensation is fair to all members."
Another member, who wanted to be known only as Mrs Sin, said her family owns two membership with debentures.
These are memberships costing a premium over the market rate which promise a payout when the club land lease expires. For the 58-year-old administrative manager, each membership that costs around $65,000 would have paid out $120,000.
"We thought it's good, we can keep it for our children. I'm very upset," she said.
Declining to reveal the number of members with debentures or how they will be compensated, general manager Farrock Ebrahim said: "JCC will definitely seek the best remuneration and arrangement for our members."
This is not the first time golf clubs have been made to relocate. Warren Golf and Country Club was made to move from Folkestone Road in Dover to Choa Chu Kang in 2000, after its land lease was not renewed.
The Singapore Island Country Club, which began as the Singapore Golf Club at the old Farrer Park race course in 1891, also relocated to Bukit Timah in 1924.
The Straits Times / Top of the News                   Published on Tuesday, 12 May 2015
By Adrian Lim       adrianl@sph.com.sg
Gilaine Ng             nggilaine@sph.com.sg 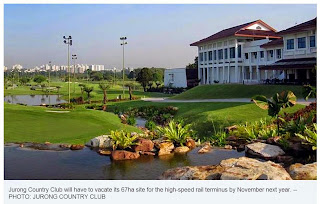