Complaints about flats in Clementi include poor quality laminate flooring 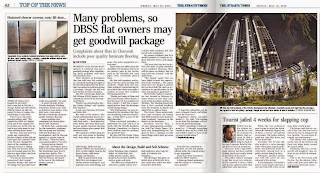 RESIDENTS of the Trivelis development in Clementi may get a goodwill package after complaining about problems with their new premium flats.
Their Member of Parliament Sim Ann told over 200 residents at a townhall meeting last night at the Trivelis pavilion that the developer has agreed to look into giving a package, though she did not have details of what it includes.
The 888-unit Design, Build and Sell Scheme (DBSS) project is developed by local firm EL Development (ELD).
Trivelis was advertised as having "choice fittings" and "quality floor finishes".
A unit costs between $370,000 and $800,000.
But some of the owners, who started collecting their keys in January, found various problems with their units - from defective stove knobs and rusty dish racks to poor quality laminate flooring and even shower glass panels that shattered easily.
The common corridor along 40 units was also prone to flooding with 4cm-deep water when it pours. The water seeped into several units.
Some units also differ from the showflats. For instance, there was no sanitary pipe in the service yard in the showflat but such pipes were eventually placed there.
Ms Sim told reporters yesterday at the two-hour meeting with residents: "Right from day one, when residents started moving in, we realised that there were quite a number of issues that residents felt disappointed by.
"Having met many of them and also visited many of their homes, I feel that many of our residents do have a point... I feel that a meaningful gesture from the developer would change things.
"(On Wednesday), we were informed by the developer that they are considering some sort of package... I think that's a move in the right direction."
When contacted yesterday, a spokesman for ELD said it is in touch with the Trivelis Residents Working Committee to discuss what could be done for residents on a goodwill basis.
He also told The Straits Times that ELD has received about 300 e-mails from residents, but that not all were complaints.
He assured residents that ELD would continue to repair or replace defective items, and engage them.
"We have tried our best to deliver the units in good condition to our residents. However, there will be lapses on defects that we may have not covered," said the spokesman.
"We deeply regret that we have failed to meet the expectation of the residents... We cannot claim that our design is perfect but we have built the units in accordance to specifications in the sales and purchase agreement."
The Trivelis residents' committee was formed in February by home owners to put their concerns to the developer and the authorities. The Housing Board said that it first received feedback from the residents in March and asked ELD to address them.
The Straits Times understands that some residents are hoping that HDB would do more than just voice residents' concerns on the defects to the developer.
Resident Steven Kee, a 42-year-old programme coordinator, told The Straits Times: "It's been very disappointing but I'm glad we have a dialogue to talk about things and at least get some answers.
"I hope the authorities can do more stringent checks and follow up on the issue too."
Regulatory affairs executive Kenny C., 29, said: "I'm waiting to see what the developer will offer in the goodwill package.
"That's something to look forward to... I thought everything should be done up in a DBSS flat and I didn't expect to have to do so many rectifications."

BACKGROUND STORY
About the Design, Build and Sell Scheme
THE Design, Build and Sell Scheme (DBSS) was launched in 2005 to offer higher-income flat buyers homes with better designs and finishes.
Built on government land, DBSS flats are designed and sold by private developers, and typically come with fittings and better finishings than standard Build-to-Order flats. But unlike private condos, these projects do not have facilities such as pools and gyms.
The DBSS was suspended in 2011 after a public outcry over high indicative price tags for units at Centrale 8 in Tampines.
The developer had given an initial price of $880,000 for a five-room unit, which was later lowered to $778,000.
Pasir Ris One, launched in April 2012, was the last project offered under the scheme before it was suspended.
There have been 13 projects under the DBSS scheme.
A Housing Board spokesman said the scheme is "currently not a priority".