When marketing foreign property in Singapore, Case wants the Advertising Standards Authority of Singapore to make it mandatory for developers to publish their audited financial reports in their sales brochures. Developers should also disclose the investment risks involved and substantiate their claims on the investment returns. But industry players doubt the feasibility of such measures. -- PHOTOS: QUINTAIN, RESIDENTIAL LAND, PAVILION GROUP, SPRING CJW

CALLS for more transparency in brochures marketing foreign property in Singapore could boost investor confidence but industry players doubt such steps could be implemented.
The key concerns centre on the calls for developers to reveal financial data and the difficulty of summing up investment risks in the limited space on a handout.
But the proposal by the Consumers Association of Singapore (Case), that there should be more disclosure, seems to have been widely accepted.
Case executive director Seah Seng Choon wants the Advertising Standards Authority of Singapore (Asas) to make it mandatory for advertisers to publish their audited financial reports in their sales brochures.
Developers should also disclose the investment risks involved and substantiate their claims on the investment returns.
Mr Seah told The Straits Times yesterday: "They should submit the permits and approvals... for their projects to the authorities here to prove that (they) are genuine as some developers had gone ahead to sell without having their building plans approved."
But Mr Kelvin Fong, who markets British property here in his role as senior group district director of PropNex, does not think investment risks can be summed up in a few lines in a brochure.
Mrs Doris Tan, regional director of international residential properties services at Jones Lang LaSalle, said smaller developers would have problems disclosing their financial positions.
Mr Peter Thng, executive director of Reapfield Property Consultants, said it is more important for the authorities to ensure a "level playing field" for both local agencies and foreign developers in marketing overseas property.
He noted: "The existing legislation does not apply to foreign developers who market their own properties here. They have a free hand in their advertisements."
Mr Thng, whose firm markets only foreign property, said some overseas developers put up false ads or give misleading information by editing photos used in sales brochures.
One project advertised as being a stone's throw from the Sydney Opera House was, in fact, far away. "The photograph was edited to make the development look like it was close to the city centre," said Mr Thng.
Asas on Monday said it was working with the Monetary Authority of Singapore and the Council for Estate Agencies to review the advertising code.
Last year, Asas received nine complaints about property ads, up from six in 2013. Case has received 13 complaints regarding foreign property purchases in the past two years, said Mr Seah.
Mr Chew Hwei Yeow, chief operating officer of PPB Group, which will launch Southern Marina in Iskandar this year, said: "Tougher guidelines will create better practice and is always good for the industry. But advertisements with guaranteed returns can be misleading."
Mr Fong said: "Buyers need to attend seminars to fully understand the risks involved. Also, some developers would have created a new firm (for) the project. It would be hard to disclose their financial position in those cases."
Instead, he proposes a checklist for properties in different countries. "The checklist should include the permits needed for developers to launch the project and information such as whether banks would disburse the funds if the project is not sold out."
The Straits Times / Money                               Published on Thursday, 7 May 2015
By Joyce Yeo                                                   joycel@sph.com.sg 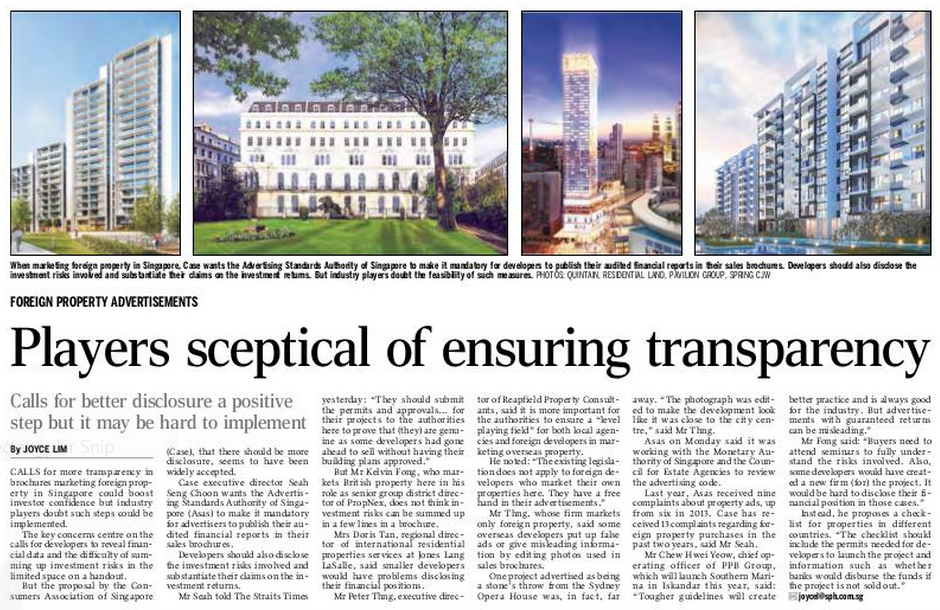