AN EXECUTIVE condominium (EC) land parcel in Choa Chu Kang was put up for sale yesterday, with analysts not expecting fierce bidding among developers.

They cite the limited amenities in the area and its distance - about 1.8km - from Choa Chu Kang MRT station, the nearest such, as reasons for the expected weak interest in the site. 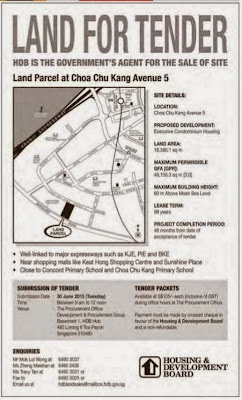 Property consultants offered a lukewarm response on prospects for the EC site.
ECs are a hybrid of public and private housing.

Mr Wong Xian Yang, manager for research and consultancy at OrangeTee, said: "There are limited pull factors for this site, with few nearby amenities. Accessibility is low, considering that there are no nearby LRT or MRT stations."

He said the key factors against the site include "the significant supply in the Choa Chu Kang vicinity amounting to nearly 2,000 units" and "the slow sales take-up in most EC projects launched since late last year".

The number of EC units launched and unsold has been rising - from 372 in the first quarter of 2013 to 2,129 in the first three months of this year.

But the site does have some redeeming features.

Executive director of SLP International Property Consultants, Mr Nicholas Mak, said that despite its drawbacks, it is "close to amenities such as hawker centres, eateries and supermarkets" and is "easily accessible via public transport".

Analysts expect tender bids in the range of $250 to $330 per sq ft per plot ratio for this site.

Two sites sold to MCL Land which built Sol Acres, an EC in the same vicinity, at Choa Chu Kang Grove, went for $375 and $339 per sq ft per plot ratio last year.