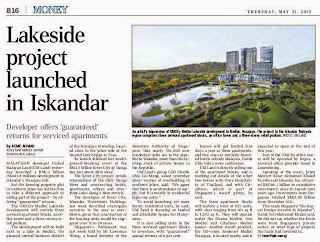 But the looming property glut in southern Johor has led the firm to take a different approach to selling part of the project - by offering "guaranteed" returns.

The development will be built next to a lake in Medini, the planned central business district of the Nusajaya township, located close to the Johor side of the Second Link bridge at Tuas.

The River City project entails rejuvenation of the dirty Danga River and constructing hotels, apartments, offices and riverfront cafes along a 6km stretch.

The developer of River City, Iskandar Waterfront Holdings, last week described oversupply concerns in the area as overblown, given that construction of the housing units would be staggered over 15 to 20 years.

Singapore's Parliament was last week told by Mr Lawrence Wong, a board member of the Monetary Authority of Singapore, that nearly 336,000 new residential units are in the pipeline in Iskandar, more than the existing stock of private homes in the Republic.

UM Land's group CEO Charlie Chia Lui Meng, asked yesterday about worries of overbuilding in southern Johor, said: "We agree that there is an abundance of supply, but it is mostly in residential high-rise units."

To avoid launching yet more luxury residential units, he said, UM Land is focusing on landed and affordable homes for Malaysians.

It is also selling units in the three serviced apartment blocks to investors, with "guaranteed" annual returns of 6 per cent.

Buyers will get limited free stays a year at these apartments, and free stays at similarly branded hotels outside Malaysia, Datuk Chia told a news conference.

UM Land is directly selling one of the apartment blocks, and is working out details of the other two towers with Onyx Hospitality of Thailand, and with Citadines, which is part of Singapore's Ascott group, he said.

The three apartment blocks will feature a total of 625 units, with sizes ranging from 431 sq ft to 1,292 sq ft. They will operate under the Shama Medini, Ozo Medini and Citadines Medini names. Another Ascott product, the 310-room Somerset Medini Nusajaya, is located nearby and is expected to open at the end of this year.

Part of the UMCity office tower will be operated by Regus, a serviced office provider based in Luxembourg.

This made Singapore "the largest foreign investor in Iskandar", Datuk Seri Mohamed Khaled said. He did not say whether the funds were from Singapore's private sector, or what type of projects the funds had invested in.