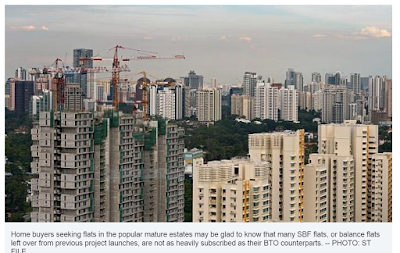 SINGAPORE - The Housing Board yesterday launched more than 9,000 new flats in a joint Build-to-Order (BTO) and Sale of Balance Flats (SBF) exercise - the biggest so far.
Home buyers seeking flats in the popular mature estates may be glad to know that many SBF flats, or balance flats left over from previous project launches, are not as heavily subscribed as their BTO counterparts.
For instance, there have only been 44 applications for the 127 three-room units up for grabs in Queenstown as of 8am on Thursday (May28).
Here is a look at some of the balance flats in mature estates from this month's exercise, which closes on June 2.

RELATED LINKS
More than 9,000 new HDB flats launched around the island from Queenstown to Clementi and Punggol