travel time to as little as 90 minutes. There will be seven stops in Malaysia and the 340km line is estimated to cost RM40

billion (S$14.8 billion) to build. The ambitious project is likely to impact the way Singaporeans and Malaysians live, play

and do business. Consumer correspondent Jessica Lim and reporter Jasmine Osada speak to experts for some ideas.

The Singapore terminus for the planned high-speed rail link will be located in the Jurong East area. Industry players estimate that commuters could pay between $80 and $90 a trip. -- ST FILE PHOTO

FIGURES from the Singapore Tourism Board show that about 1.2 million Malaysian residents visited Singapore last year - excluding Malaysian citizens arriving by land.
Traffic between both countries through the Causeway and Second Link is estimated at 400,000 crossings both ways daily.
Civil Aviation Authority of Singapore figures show that an average of 7,500 people left Singapore for Malaysia daily by air last year, of which, say experts, about 6,000 were headed to Kuala Lumpur.
National University of Singapore transport expert Lee Der Horng said he expects the high-speed rail (HSR) to run every 15 minutes - an "aggressive prediction" in his books - and have 12 carriages, each with a maximum capacity of 80 people, which is typical for HSR trains.
This will mean an extra 100,000 commuters will be able to travel in both directions daily, he added.
The HSR is expected to help ease the current labour crunch in Singapore. The Association of Small and Medium Enterprises said the project could attract more workers from Malaysia to come and work in Singapore, commuting on a daily basis.
But experts said such rail systems are not designed for daily commuting due to their pricing and station locations.
SIM University urban transport management expert Park Byung Joon said the HSR does not take people right up to the doorstep of their destination. "You would have to take another form of transportation to the destination. This makes the daily commute cumbersome," he said.
But business travellers who come to Singapore or go up to KL for short-term projects, or make weekly and monthly trips, are likely to be major users.
The HSR will also facilitate travel for attending meetings, incentives, conferences and exhibitions events in both countries, said Nanyang Technological University transport economist Walter Theseira.
"Companies now book rooms for delegates for a night. With the HSR, they can return on the same day. This will significantly reduce the cost of doing business and spur partnerships between both countries," said Assistant Professor Theseira.
The HSR's regular schedules, travel time and cost competitiveness against airlines, and easier access to the city centre compared with airports, are likely to make it attractive to business travellers, he said.
For leisure, the HSR is expected to increase the number of day trips and short stays in both countries. "It provides an avenue for twin-city tour packages," said Ngee Ann Polytechnic tourism lecturer Michael Chiam.
WHEN it comes to the pricing of HSR tickets, experts said they expect prices to be pegged to those charged by budget airlines.
"I have great difficulty believing that the price of a ticket will be at a rate that regular workers can afford for daily commute," said Prof Theseira.
For instance, the price of a standard full-fare HSR ticket from Taipei to Kaohsiung - a distance of about 345km - is NT$1,630 (S$70).
Industry players estimate that commuters may pay between $80 and $90 a trip - although the pricing system may be similar to that of airlines, where fares change daily depending on demand.
Currently, people travelling from Singapore to KL pay between $25 and $50 for a five-hour bus ride, about $80 for a 45-minute budget flight, and about $250 for a full-service flight.
Analysts said they expect budget airlines to be hardest hit, given the fact that they now have a 60 per cent share of the Singapore-KL market.
In South Korea, for instance, domestic airline seating capacity had to be reduced by over 30 per cent after the HSR opened in 2004, according to research organisation Capa Centre for Aviation.
HSR systems in Europe, such as the Eurostar that connects major cities like London and Paris, have loose border controls.
It would be different for the Singapore-Malaysia HSR, said Dr Wu Shang-su, a research fellow at the Institute of Defence and Strategic Studies.
Although the people of all Asean member states do not need vias to cross borders, immigration checks will still be in place to ensure safety.
Said Security Association (Singapore) president T. Mogan: "We do not have borders on large, open land, and all our transport systems are contained and controlled. I don't think we need to be unduly worried."
Dr Wu said: "As long as the Singapore authorities maintain a similar level of border control as they do at other checkpoints, the HSR is unlikely to pose considerable danger for Singapore." 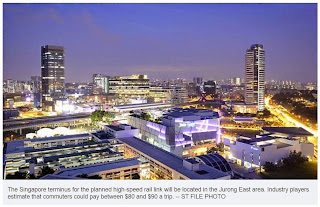