http://propertysmartinvestors.blogspot.sg/2015/05/land-occupied-by-golf-course-likely.htmlTHE site of Singapore's high- speed rail (HSR) terminus could be in the south-eastern region of the Jurong Lake District, experts said.

They pointed to a 1.02 million sq ft plot of land - sandwiched between Jurong Town Hall Road and the Ayer Rajah Expressway (AYE) - as a likely location for the upcoming terminus.
Besides being designated as a reserve site in future land development plans, there is also a group of land parcels adjacent to it which has been set aside for hotels.
"To support this hotel cluster, you need something which can bring huge numbers of people into Singapore, such as a HSR," said Ms Christine Li, research director at Cushman & Wakefield, a real estate consultancy.
Yesterday, Prime Minister Lee Hsien Loong revealed that the Singapore terminus for the HSR link to Kuala Lumpur will be in the Jurong Lake District in Jurong East.
This will dovetail with plans to develop the area into a second central business district, he said.
Experts said the land plot along Jurong Town Hall Road is just outside Jurong Gateway, a 70ha commercial hub, and also close to the Jurong East bus and train interchange, which serves two MRT lines.
The land plot is currently occupied by JTC's iHub building and the Jurong Country Club golf course.
National University of Singapore transport researcher Lee Der-Horng said that more land south of the Jurong Lake District could be made available, if proposed plans to realign a stretch of the AYE between Yuan Ching Road and Jurong Town Hall Road materialise.
Dr Lee said: "A large portion of Jurong East is occupied by housing, so we don't really have much available land."
Residents in Jurong East, while looking forward to having the HSR terminus in their backyard, expressed concern about the increase in human and vehicular traffic to the area.
"The capacity of the MRT trains and the interchanges has to be increased," said Mr Colin Seow, 25, who just graduated from university.
SIM University's urban transport management expert Park Byung Joon said two more MRT lines being planned - the Cross Island Line and the Jurong Region Line - will help to increase the transport capacity in the area.
On the bright side, some residents are also looking at new travel options.
"It's a big plus point if I can travel to KL in 90 minutes for a weekend trip," said Ms Allvina Lee, 37, who works in purchasing.
Related Links      (Possible locations for a new terminus):- 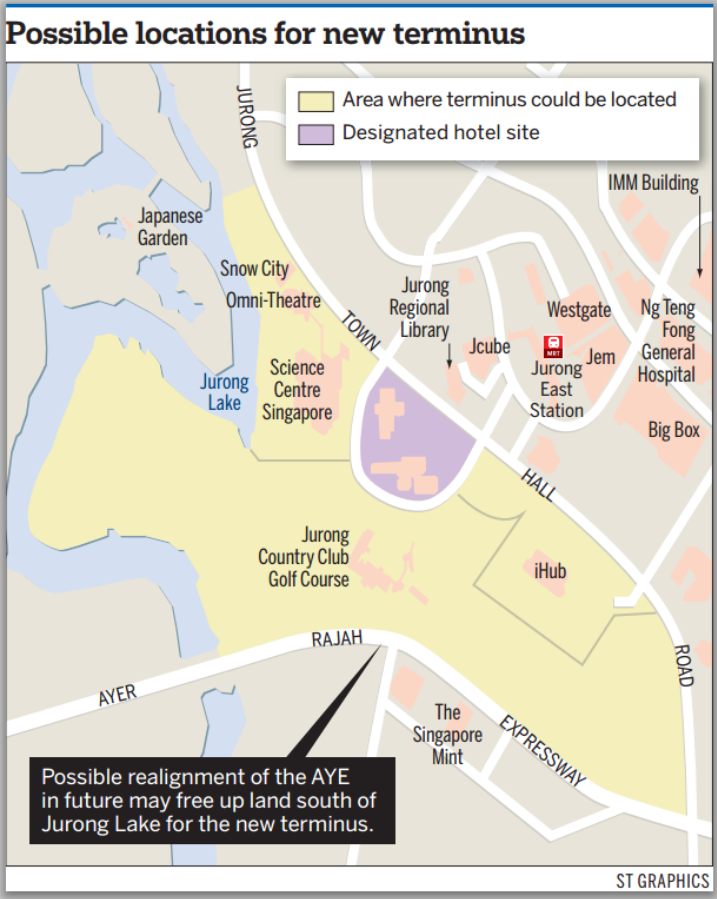