paid for its 0.65ha plot was too high, especially since 1MDB had bought the TRX land from the Finance


THE price paid by pilgrimage agency Lembaga Tabung Haji for a piece of land sold by Malaysian state fund 1Malaysia Development Berhad (1MDB) is creating a lot of buzz in Malaysia.
Tabung Haji paid RM2,773 (S$1,030) per sq ft for the land in Malaysia's first dedicated financial district known as Tun Razak Exchange (TRX), or RM188.5 million in total. The plot is 0.65ha - about the size of a football field - and TRX is 28ha.
Reports on online media say the price was too high, especially since 1MDB had bought the TRX land from the Finance Ministry, its parent, for just RM64 psf.
The land purchase has led former premier Mahathir Mohamad to attack Prime Minister Najib Razak, who chairs 1MDB's board of advisers, over the "bailout" of the state fund by Tabung Haji.
Datuk Seri Abdul Azeez Abdul Rahim, chairman of Tabung Haji, last Saturday said it plans to sell the land for a profit and has had three offers.
Still, some property analysts see Tabung Haji as having paid a fair price for the land, based on the RM2,500 psf to RM3,300 psf paid in recent land deals in downtown Kuala Lumpur.
Mr Brian Koh, executive director at consultancy DTZ Nawawi Tie Leung, said critics might still question whether Tabung Haji "has been forced into the transaction to salvage 1MDB, as well as the price differential between the historical cost of the land to today's market value".
Mr Paul Khong, deputy managing director of Savills (Malaysia), said: "Looking at the price of RM2,773 psf for a plot ratio of 10 and, with the benefit of approvals for the site, the masterplanning and general infrastructure works done by TRX, the sale price looks well in line with the market."
A Tabung Haji official last Friday detailed to The Straits Times four land plots within a 3km radius of its project that sold north of RM3,000 psf.
These included land owned by the German and French embassies bought by Malaysian companies as well as a serviced apartment project being launched in next-door Bukit Bintang.
Tabung Haji bought the land with plans to build a 40-storey residential tower on the TRX site.
The issue is a sensitive one for the administration of Datuk Seri Najib because Tabung Haji manages funds for Malaysian Muslims, most of whom are government supporters.
Tabung Haji was set up 52 years ago to help Muslims - especially poor rural farmers - to save up to pay for their pilgrimage to Mecca.
The agency is today a respected name in Islamic circles around the world because of its efficient management of pilgrims during the annual Haj season.
Its website shows that of its RM50 billion of funds, 53 per cent is invested in equities, 27 per cent in fixed income, 15 per cent in real estate and the remaining 5 per cent held in cash.
It paid an average of 8 per cent in annual dividends and bonuses in the past five years. 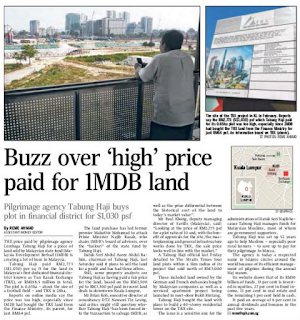