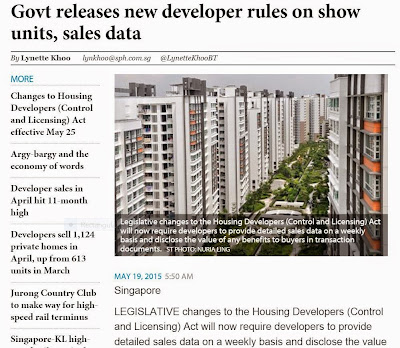 LEGISLATIVE changes to the Housing Developers (Control and Licensing) Act will now require developers to provide detailed sales data on a weekly basis and disclose the value of any benefits to buyers in transaction documents. For the first time, the government is introducing a new set of rules to also ensure that developers accurately depict actual housing units in their showflats.

Amendments to the Act and the new set of rules on show units under the subsidiary legislation, Housing Developers Rules, will take effect from this month to "improve safeguards and provide more information to prospective purchasers of private residential properties", the Ministry of National Development (MND) said on Monday.
Augustine Tan, president of the Real Estate Developers' Association of Singapore (Redas), noted that developers that are already ensuring accurate representation in their showflats "will not have any issues" with the new rules.

"It's better for the buyers and we have no issues with that because we want the buyers to know exactly what they are getting. It's in the right direction," he said.
One of the show unit rules requires the floor area of the show unit to be the same as that of the actual housing unit; another rule requires all external and structural walls (both internal and external) of an actual unit to be depicted in the show unit. If any internal non-structural wall is not built in the show unit, the position, thickness and width of that wall must be clearly marked on the floor and labelled.
Existing show units that have been set up and open for viewing before July 20 will be exempted from the new show unit rules. But developers have to inform buyers of the differences between the show unit and the actual unit, prominently displaying a detailed list and description of the differences at the entrance of the show unit, and provide buyers a copy of that list.

"Some developers may not be very thrilled by some of these new rules, but they may be resigned to have to comply as it is now the law of the land," said SLP International executive director Nicholas Mak.
It is common for developers to create "optical illusions" in their showflats, such as thin markings on the floor to depict the walls and using the same tiles for the balcony and the living room to make the latter look bigger, he observed. "With the actual units getting smaller and smaller, developers try not to turn off the buyers and will ask the interior designer to come up with ways to make the unit not look too small."
A spokesman from the Urban Redevelopment Authority (URA) told BT that that developers will have to submit a declaration that the show units are set up in compliance with the requirements before opening the show units for viewing. The Controller of Housing will conduct spot checks to ensure that the developers build their show units according to the requirements.
"The developer will be required to close the show unit if it is not erected in compliance with the requirements in the Housing Developers (Show Unit) Rules," the spokesman said. "Further action, including suspension or revocation of licence, may also be taken against the developer. In the event that a licensed developer is found to have breached the rules, he shall be liable to a fine not exceeding S$5,000 or to imprisonment for a term not exceeding six months, or to both."
There will also be less room for manoeuvring by developers when it comes to pricing tactics. From next Monday, housing developers must submit detailed sales data to the Controller of Housing every week. This will include sales volumes and transacted prices of individual units and the value of any benefits to buyers, including cash rebates, absorption of legal fees or stamp duties, rental guarantees and furniture vouchers. The information will be published on the URA website weekly from June 5.
The Option to Purchase and Sale & Purchase agreements - which are standard forms prescribed under the Housing Developers Rules - will also be amended with effect from July 20 to include more information, such as the value of any benefits that developers offer to buyers.
Buyers already have to declare any price discount, rebate or other benefit when seeking a home loan under the Monetary Authority of Singapore rules. In an ongoing lawsuit, however, UOB is suing a Lippo Group subsidiary and seven individuals for allegedly misleading the bank into granting inflated housing loans for 38 units at Marina Collection in Sentosa from 2011 to 2013 by not disclosing substantial furniture rebates.
Chia Siew Chuin, Colliers International director of research and advisory, said that discounts have always been difficult to quantify and ascertain. "With more detailed information, buyers can decide for themselves which type of discounts are the most beneficial to them, in real value terms."
But consultants flagged that there is a minor flipside to publishing weekly developers' sales data: Mr Mak felt that weekly data may be an "over-kill" and increase the work for some developers' staff; Ms Chia noted that property trends develop over the longer course of months, quarters to even a year.
"Buyers should take note that weekly information should be harvested for individual project details, rather than be used as an indication of wider market trends," Ms Chia added.
Developers told BT they were unsurprised by the changes, having largely complied since an amendment bill for the Housing Developers Act was read in 2013 in Parliament.
Cheang Kok Kheong, CEO of development and property at Frasers Centrepoint Limited, said that its recent showflats are in full compliance with the new rules. "We believe more regular updates of sales data will be beneficial for everybody including buyers and developers."
A spokesman from City Developments also said that the group is fully compliant with the new regulatory requirements. "Nevertheless, we are reviewing the announced revisions in detail and will implement various measures, where needed," he added.
Knight Frank executive director Tay Kah Poh noted that the new rules will curtail developers' flexibility to price according to business conditions and lay out their show units to highlight design possibilities.
"Singapore's control regime, in terms of disclosure, is probably one of the most onerous around, and these changes will add to the burden on developers to 'show their cards'," Mr Tay said. "But this seems to be in keeping with the prevailing regulatory mood for the authorities to ring fence consumers more and more against all manner of malpractices."
The Business Times/Real Estate           Published on Wednesday, 20 May 2015
By Lynette Khoolynkhoo@sph.com.sg@LynetteKhooBT
Govt releases new developer rules on show units, sales data