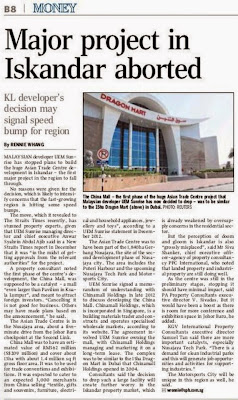 MALAYSIAN developer UEM Sunrise has stopped plans to build the huge Asian Trade Centre development in Iskandar - the first major project in the region to fall through.
No reasons were given for the decision, which is likely to intensify concerns that the fast-growing region is hitting some speed bumps.
The move, which it revealed to The Straits Times recently, has stunned property experts, given that UEM Sunrise managing director and chief executive Anwar Syahrin Abdul Ajib said in a New Straits Times report in December that it was "in the midst of getting approvals from the relevant authorities" for the project.
A property consultant noted the first phase of the centre's development, the China Mall, was supposed to be a catalyst - a mall "even larger than Pavilion in Kuala Lumpur", and meant to attract foreign investors. "Cancelling it is not good for business. Others may have made plans based on the announcement," he said.
The Asian Trade Centre is in the Nusajaya area, about a five- minute drive from the Johor Baru checkpoint at the Second Link.
China Mall was to have an estimated value of RM562 million (S$209 million) and cover about 13ha with about 1.4 million sq ft gross floor area. It was to be used for trade conventions and exhibitions. It was expected to cater to an expected 3,000 merchants from China selling "textile, gifts and souvenirs, furniture, electrical and household appliances, jewellery and toys", according to a UEM Sunrise statement in December 2012.
The Asian Trade Centre was to have been part of the 1,840ha Gerbang Nusajaya, the site of the second development phase of Nusajaya city. The area includes the Puteri Harbour and the upcoming Nusajaya Tech Park and Motorsports City.
UEM Sunrise signed a memorandum of understanding with Chinamall Holdings in late 2012 to discuss developing the China Mall. Chinamall Holdings, which is incorporated in Singapore, is a building materials trader and constructs and operates specialised wholesale markets, according to its website. The agreement involved UEM Sunrise owning the mall, with Chinamall Holdings managing and marketing it on a long-term lease. The complex was to be similar to the 15ha Dragon Mart in Dubai that Chinamall Holdings opened in 2004.