No decision yet on site for Johor station


HOPPING onto an MRT train and arriving in Johor Baru is unlikely to be a reality before 2020, as Malaysia has yet to determine a station site for its end of the line.
This Rapid Transit System link was first announced by Singapore and Malaysia in May 2010, and was initially targeted to be ready by 2018.
This was pushed to 2019 when Singapore decided to lengthen the Thomson Line - to which the cross-border MRT line will link.
Rail construction experts said even if work started today, the line would be completed by 2020 at the earliest. But work is unlikely to start any time soon because no decision has yet been made on where the JB station will be.
At a leaders' retreat here yesterday, Malaysian Prime Minister Najib Razak said this should be resolved "by the time we meet again".
Prime Minister Lee Hsien Loong said "we're ready to progress it as soon as both sides are ready".
The Straits Times understands that even if the station site is confirmed next month, construction cannot start immediately.
Another technical study will be done to determine the various options for the way the line runs - whether above ground, underground, or a combination of the two.
Then a detailed design of the line, along with other technical specifications, will be done.
Approval by the relevant authorities on both sides of the Causeway will follow.
And because it is a project by two different countries, how it is financed and operated will have to be discussed and agreed upon too. These discussions could take 12 months to 18 months, before a construction tender is called.
The tender process will take another six months.
By the time construction starts, it would be mid-2017. That is, if the station site is decided by next month.
Mr Yong Mee Him, director of construction company Woh Hup - which has clinched a number of MRT projects - said it would take around five years to build the line "if everything goes smoothly".
Mr Rajan Krishnan, chief executive of engineering firm KTC group and former head of rail projects at the Land Transport Authority, said meeting the 2019 deadline "is going to be a tough call".
If the Johor station is to be at JB Sentral, an existing train station next to the popular City Square shopping mall, the line would be 4km to 5km long.
That would mean constructing 8km to 10km of train tunnels, assuming that the line is underground.
Hence, tunnelling alone would take over a year, as the average speed of a tunnel boring machine is 24m a day. 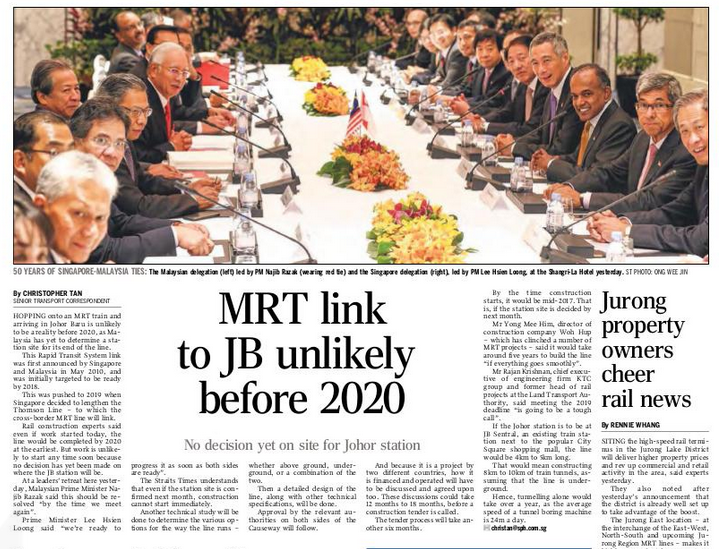