TOP Indonesian developer Mulia Group will shell out RM665 million (S$245 million) for the right to develop Tun Razak Exchange's (TRX) flagship Signature Tower - set to be more than 70 storeys tall and an iconic addition to Kuala Lumpur's skyline.
The announcement yesterday was the latest in a recent string of reported deals for the financial hub owned by debt-ridden state investor 1Malaysia Development Berhad (1MDB), including controversial purchases by statutory funds. 1MDB has ambitions for TRX to "lead the way for Kuala Lumpur to be a global centre for international finance, trade and services".
Mulia Group paid about RM4,400 per sq ft (psf) for Signature Tower's land bank, according to a 1MDB spokesman. It joins other TRX investors such as Australia's Lend Lease International, a global property and infrastructure group developing TRX's RM8 billion Lifestyle Quarter, and Veolia Water Technologies, whose water management technology is expected to halve potable water use in the development.
"Our Mulia Group wishes to be an integral part of this iconic state-of-the-art development not only for Malaysia but also for the region and beyond. We see TRX's potential to further develop the city's role as a financial capital," said Mr Eka Tjandranegara, president director and owner of the Indonesian firm, in a statement.
However, accusations that savings of Muslim pilgrims were being used to bail out 1MDB - which has struggled to meet financing obligations - have forced pilgrimage agency Tabung Haji to sell its acquisition of a 0.64ha plot worth RM188.5 million. This was as the civil servants' pension fund said it was still assessing whether to pay over RM1 billion for land and a 40-storey office building.
1MDB had acquired the 28ha of land for TRX from the government at just RM64 psf three years ago, leading to questions over why the government did not deal directly with the statutory funds in the first place, instead of having them pay market rates of up to RM2,774 psf to 1MDB.
It is also unclear why China's Exim Bank had not continued its interest in Signature Tower after Prime Minister Najib Razak announced a year ago that it would be jointly developing the building with 1MDB. Further, Abu Dhabi-owned Aabar Investments has been quiet over its role since it was announced in 2013 as the "first major multinational anchor investor" for the financial centre, which has a projected RM40 billion gross development value.
Still, the deals that have been made public signal that the TRX project - with major earthworks nearing completion, according to news reports last month - is finally taking off, with Phase 1 scheduled for completion in 2017.
Analysts see transport projects such as the Klang Valley MRT and high-speed rail link to Singapore as further positives for TRX.
"I hope the government can bring in more foreign investors in the service sector - banks, oil and gas industries... which will be beneficial to the high-end residential market," RHB bank's property analyst Loong Kok Wen told The Straits Times.
According to its masterplan, TRX will have 25 buildings offering over 21 million sq ft of total floor space for office, residential, hotel and retail use.
Sources said there has been keen interest in TRX, which is adjacent to the thriving Bukit Bintang business district, from local private players, with some land bids reaching up to RM3,700 psf.
"Some are disappointed that cheaper bids like Tabung Haji's won but it's not just about the pricing. One bidder wanted help with financing, saying it is difficult to secure loans given that 1MDB raised money at expensive rates," a source close to several commercial developers said.
The Straits Times / Top of the News                                   Published on Thursday, 14 May 2015
By Shannon Teoh, Correspondent in KL                            shannont@sph.com.sg 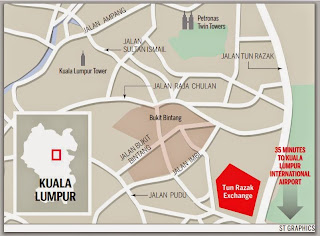