Pontiac Land mak.es its mark in US with style

Pontiac Land makes its mark in US with style. It unveils luxury condo tower on prime New York site beside MoMA

SINGAPORE developer Pontiac Land Group has revealed more details of its planned luxury condominium located beside a famous New York landmark, six years after the project was stalled due to insufficient funds.
The 53W53 tower will make the group one of the first Singapore developers to make its mark in the United States residential market.
It is helping to revive the project with partners real estate investor Hines and investment bank Goldman Sachs.
The 82-storey building, which will rise 320m and taper like a shard of glass, is located beside the Museum of Modern Art (MoMA). It is designed by celebrated French architect Jean Nouvel.
The project was unveiled to about 500 guests on Monday.
More than 1,000 potential buyers, including over 50 from Singapore, have registered their interest for the 139 apartments.
The Singapore group, which was founded in 1961, owns hotels in Singapore like The Ritz-Carton, The Patina and Capella. It has also developed Ardmore Residence, The Colonnade and Millenia Tower.
Construction of 53W53 started last year with the building expected to be completed in 2018, said Corcoran Sunshine Marketing Group, the sales agent.
Prices start from US$3 million ($4 million) for one-bedders of about 1,200 sq ft to above US$50 million for units of 8,000 sq ft.
The tower is on prime land next to MoMA, between 53rd and 54th Street, and is a stone's throw away from Central Park in Manhattan. It has views of the city and Central Park.
Residents will get special privileges at MoMA, which will extend its gallery space into three levels within the base of the development, Pontiac said.
Ms Kwee Su-Lin, Pontiac's vice-president of investments, said the opportunity to enter the US arose when "credit markets in the States seized up" because of the global financial crisis.
She heard that Hines, a Houston-based developer, was looking for funding and she did not want to miss the opportunity "to help reshape New York's skyline", she told The Straits Times.
Hines had partnered Goldman Sachs Group to buy the site for US$125 million but the project ran into trouble due to the financial crisis.
Ms Kwee said: "We see a lot of similarity between Manhattan and Singapore. Firstly, they are both islands... the real estate is limited and the core real estate is even more limited. And our company has a history of building iconic landmarks in central locations."
In 2013, Pontiac said it invested US$200 million and secured another US$860 million in construction loans from four Asian banks to build 53W53.
Ms Kwee, who is the daughter of Mr Kwee Liong Keng, one of four brothers who own Pontiac, joined the company in 2012.
Straits Times / Money                                           Published on Wedbesday, 13 May 2015
By Joyce Lim (in New York)                                 joycel@sph.com.sg 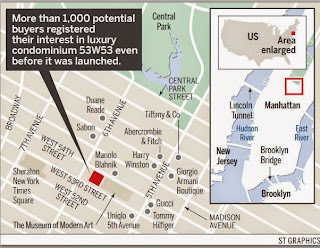