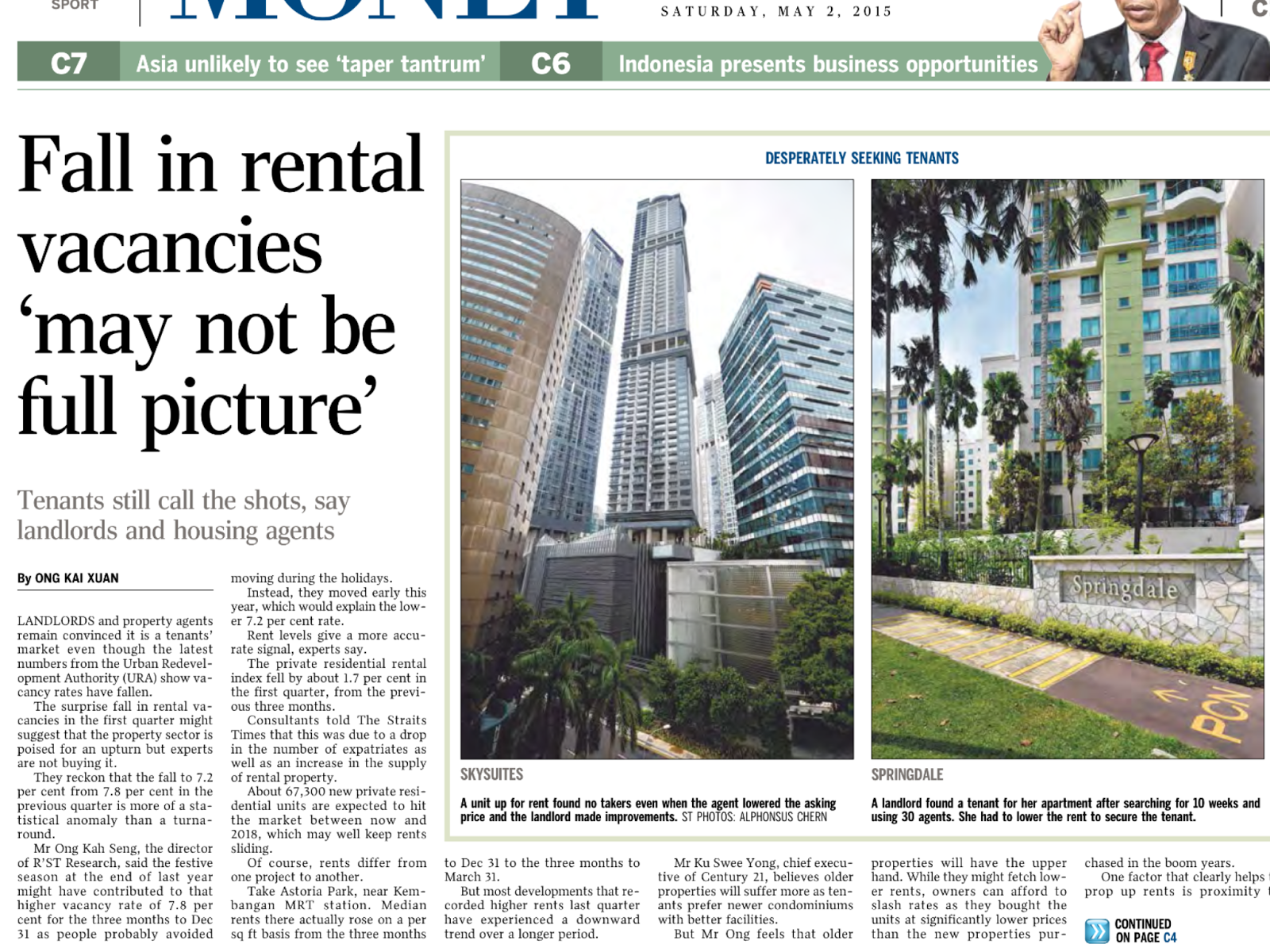 Pull factors: Access to public transport, amenities
LANDLORDS and property agents remain convinced it is a tenants' market even though the latest numbers from the Urban Redevelopment Authority (URA) show vacancy rates have fallen.
The surprise fall in rental vacancies in the first quarter might suggest that the property sector is poised for an upturn but experts are not buying it.

They reckon that the fall to 7.2 per cent from 7.8 per cent in the previous quarter is more of a statistical anomaly than a turnaround.
Mr Ong Kah Seng, the director of R'ST Research, said the festive season at the end of last year might have contributed to that higher vacancy rate of 7.8 per cent for the three months to Dec 31 as people probably avoided moving during the holidays.
Instead, they moved early this year, which would explain the lower 7.2 per cent rate.
Rent levels give a more accurate signal, experts say.
The private residential rental index fell by about 1.7 per cent in the first quarter, from the previous three months.
Consultants told The Straits Times that this was due to a drop in the number of expatriates as well as an increase in the supply of rental property.
About 67,300 new private residential units are expected to hit the market between now and 2018, which may well keep rents sliding.
Of course, rents differ from one project to another.
Take Astoria Park, near Kembangan MRT station. Median rents there actually rose on a per sq ft basis from the three months to Dec 31 to the three months to March 31.
But most developments that recorded higher rents last quarter have experienced a downward trend over a longer period.
Mr Ku Swee Yong, chief executive of Century 21, believes older properties will suffer more as tenants prefer newer condominiums with better facilities.

But Mr Ong feels that older properties will have the upper hand. While they might fetch lower rents, owners can afford to slash rates as they bought the units at significantly lower prices than the new properties purchased in the boom years.
One factor that clearly helps to prop up rents is proximity to public transport.
Mr Ong Teck Hui, national director for research and consultancy at Jones Lang LaSalle Property Consultants, said that while the age of a unit and the region it is in do not appear to display any clear trends as far as rental price declines go, those closer to MRT stations generally showed a smaller decline.
CBRE's head of research for Singapore and South-east Asia, Mr Desmond Sim, said the more convenient MRT network means expatriates now live in suburban areas with access to public transport rather than congregate at central places like Newton.
Mr Nicholas Mak, the executive director of SLP International Property Consultants, said: "Location is the top criterion.
"MRT isn't the only important thing. People prefer places with wet markets or even good schools. Another key point is the proximity to workplaces."
Employment prospects are another crucial factor that can weigh on a region's rental market.
Analysts expect that north-eastern areas like Sengkang, Hougang and Punggol will come under the most pressure as a lot of new projects are coming up, yet there has been no significant increase in jobs in those areas.
So while tenants may have the upper hand now, the weak rental market hits property agents and landlords hard.
Agent Germaine Ng said: "It's very hard to rent property out now. I spend so much money putting advertisements in the newspapers, but sometimes I don't even get a single enquiry."
She advertised a two-bedroom apartment in the Skysuites @ Anson condominium in the papers and on the Internet with an asking price of $3,900 a month about six weeks ago.
Even though the apartment is smack in the middle of the central business district and next to Tanjong Pagar MRT station, she has not been able to get any tenants, forcing her to lower the asking price to $3,500 on the Internet and $3,700 in the newspapers.
The landlord has even done up the balcony and included beds and lights.
On the other hand, a landlord who wishes to be known only as Ms Tan has just found a tenant after 10 weeks of searching and trying 30 agents.
The catch was that she had to lower her asking price by a few hundred dollars for the two-bedroom apartment in Springdale in Upper Bukit Timah.
She remains optimistic: "I think it'll pick up in the next one to two years. An MRT station is coming up two bus stops away, and we might have a kindergarten within the condominium."
Mr Chris Koh, director of property consultancy Chris International, advised landlords to be flexible.
"It's better to rent out your unit for a little less than to keep it vacant. Landlords are getting more realistic. They're less choosey on the rental period and type of tenant."
Mr Mak, however, said landlords can do only so much: "They may choose to renovate the house or provide more furniture, but these things cost money. The rent has to be able to cover it."
In fact, Mr Ku thinks that throwing in free furniture might not be the way to go. He said: "Some tenants might come with their own furniture, and the landlord has nowhere to move the furniture that's already in the house. Flexibility is key now."
ongkx@sph.com.sg
By Ong Kai Xuan
Published on May 2, 2015 12:52 AM, Saturday
The Straits Times - MONEY