HDB to launch high-tech flats in Punggol.  Punggol Northshore estate to be a test bed for smart technologies 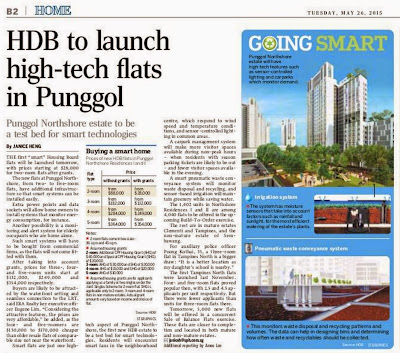 THE first "smart" Housing Board flats will be launched tomorrow, with prices starting at $28,000 for two-room flats after grants.

The new flats at Punggol Northshore, from two- to five-room flats, have additional infrastructure so that smart systems can be installed easily.
Extra power points and data sockets will allow home owners to install systems that monitor energy consumption, for instance.
Another possibility is a monitoring and alert system for elderly occupants who are home alone.
Such smart systems will have to be bought from commercial firms, as the flats will not come fitted with them.
After taking into account grants, prices for three-, four- and five-room units start at $132,000, $249,000 and $354,000 respectively.
Buyers are likely to be attracted by the waterfront setting and seamless connection to the LRT, said ERA Realty key executive officer Eugene Lim. "Considering the attractive features, the prices are very affordable," he added, as the four- and five-roomers are $130,000 to $170,000 cheaper than older resale flats of comparable size not near the waterfront.
Smart flats are just one high-tech aspect of Punggol Northshore, the first new HDB estate to be a test bed for smart technologies. Residents will encounter smart fans in the neighbourhood centre, which respond to wind speed and temperature conditions, and sensor-controlled lighting in common areas.
A carpark management system will make more visitor spaces available during non-peak hours - when residents with season parking tickets are likely to be out - and fewer visitor spaces available in the evening.
A smart pneumatic waste conveyance system will monitor waste disposal and recycling, and sensor-based irrigation will maintain greenery while saving water.
The 1,402 units in Northshore Residences I and II are among 4,040 flats to be offered in the upcoming Build-To-Order exercise.
The rest are in mature estates Clementi and Tampines, and the non-mature estate of Sembawang.
For auxiliary police officer Poong Kothai, 35, a three-room flat in Tampines North is a bigger draw: "It is a better location as my daughter's school is nearby."
The first Tampines North flats were launched last November. Four- and five-room flats proved popular then, with 2.5 and 4.5 applicants per unit respectively. But there were fewer applicants than units for three-room flats there.
Tomorrow, 5,000 new flats will be offered in a concurrent Sale of Balance Flats exercise. These flats are closer to completion and located in both mature and non-mature estates.
janiceh@sph.com.sg
Additional reporting by Amos Lee
A two-roomer for $28,000, with grants
A NEW two-room flat in Punggol Northshore will cost just $28,000 - if you buy a smaller unit and receive the maximum grant.
Prices start at $88,000 before grants. Two-roomers come in 36 sq m and 45 sq m sizes.
In previous Build-to-Order exercises, the price range of larger units was about $20,000 higher than that of smaller ones.
The $28,000 price assumes total grants of $60,000, comprising an Additional CPF Housing Grant (AHG) of $40,000 and a Special CPF Housing Grant (SHG) of $20,000.
The AHG is for first-time buyers and varies according to income. The maximum $40,000 amount is for buyers who apply as a family and have a gross monthly household income of $1,500 or less.
The SHG is also for first-timers only. Its maximum amount of $20,000 is available to all families who qualify for a two-room flat.
First-timer singles applying alone can receive an AHG of up to $20,000 and SHG of $10,000.
The Punggol Northshore flats are not the cheapest. Two-roomers in non-mature estates often cost less than $20,000.
In the March 2014 Build-to-Order exercise, for instance, two-roomers started at $10,000 in Sembawang and $15,000 in Yishun, after grants.
RELATED LINKS 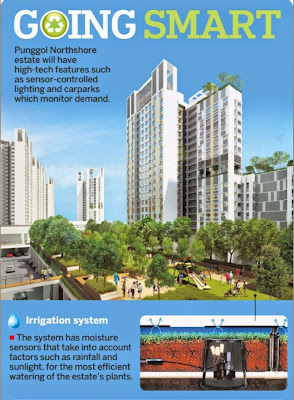 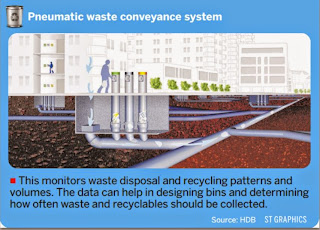