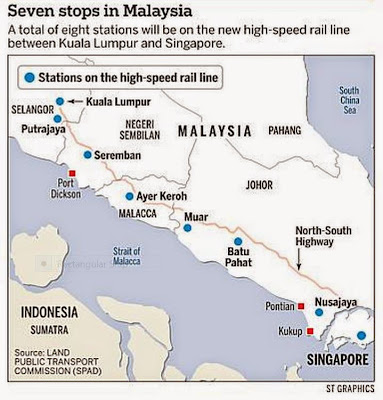 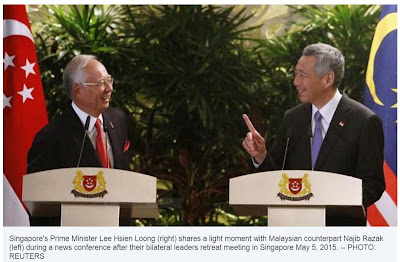 Story was first published on May 5, updated on May 11
SINGAPORE - The Jurong Country Club site will be where the terminus of the Singapore-Kuala Lumpur high-speed rail will be located. the Government announced on Monday, May 11.

The Singapore Land Authority has gazetted the acquisition of the 67ha plot and the club will be expected to hand over the land by November 2016.

The eagerly anticipated project will cut travel time between the two cities by more than half.
Here's what we know about the project so far:

1. When was the project announced?
The high-speed rail link was announced in February 2013, at a yearly retreat attended by Mr Lee and Mr Najib.

2. When will it be completed?

The original target completion date for the mammoth rail project, estimated at 320-340km long, was 2020.

But both Mr Lee and Mr Najib said on Tuesday that the target was not realistic considering the scale and complexity of the project.

Mr Najib noted that the design process of the new rail link will likely take one year, the tender process another year, and construction itself about five years.

The two leaders said a new deadline for the completion of the link should be announced at the end of this year.

3. How long will it take to travel between the two cities on the high-speed rail?

Once the train service starts, passengers will be able to travel between Singapore and Kuala Lumpur in just 90 minutes.

Currently, people travelling between Singapore and Kuala Lumpur pay between $30 and $50 for a 5½-hour bus ride or hundreds of dollars for a 45-minute full-service flight.

4. How many stops will it have?

Malaysia has announced seven stops along the route - Kuala Lumpur, Putrajaya, Seremban, Ayer Keroh, Muar, Batu Pahat and Nusajaya in Johor's Iskandar Malaysia development corridor. These stops will be served by a slower service in addition to a non-stop express option. Find out more about the seven stops.

5. Where is the terminus in KL?
Malaysia has already confirmed that its terminus will be in Bandar Malaysia, about 5km from the landmark Petronas Twin Towers in the heart of Kuala Lumpur.

The Bandar Malaysia project is a planned 200-hectare mixed development that will sit on land in an existing military airbase in Sungai Besi.

6. Where is the terminus in Singapore?

The new Jurong East HSR terminus will be sited where the Jurong Country Club is now located. The plot is near Science Centre Road, and less than 1km from the Jurong East MRT station.

Analysts say the tickets are expected to be between $80 and $90 a trip - but fares may change daily depending on demand. The price is likely to be pegged to budget airline fares, which charge about about $80 for a 45-minute flight.

Update: A round-trip ticket will cost less than RM400 (S$148), according to a report citing Malaysia's Land Public Transport Commission on May 12, 2015.

8. What will commuters use it for?
At that price, workers will find it hard to use the HSR for their daily commute, but business travellers will find it more convenient to travel between Singapore and Kuala Lumpur for short-term projects, or make weekly and monthly trips.

It will also make attending conferences, meetings and exhibitions easier as delegates will not have to stay overnight.

For leisure, the HSR is expected to increase the number of day trips and short stays in both countries as twin-city tour packages are now possible.

9. Who is bidding for the project?
The project, estimated to be worth $14.9 billion, has drawn great interest from construction and infrastructure firms from China and Japan.

10. How will this fit into plans to turn Jurong into the second central business district?
Ambitious plans to make Jurong a business and leisure centre were announced at the National Day Rally last year.

The Jurong Lake district area comprises Jurong Gateway and Lakeside. Together, they occupy 360 hectares of land and waterbody - about the size of Marina Bay.

The area will have a range of new amenities including the Jurong Lake Gardens, a new Science Centre, Ng Teng Fong General Hospital, offices and homes.