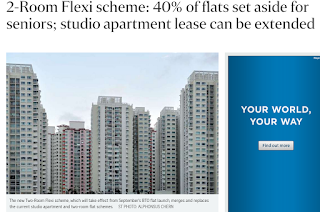 SINGAPORE - Elderly flat buyers will soon have more options to age in place when the Housing Board's new Two-Room Flexi scheme kicks in next month.

At least 40 per cent of the flats under the scheme in each Build-to-Order (BTO) project will be set aside for households aged 55 and above. This quota will be subject to a minimum of 100 units in each project, in order to ensure "adequate supply" for the elderly, said the HDB on Wednesday.
Under the new scheme, existing studio apartment owners, including those who have not collected their keys, will also have the option of topping up their current 30-year lease by five, 10 or 15 years at any point of time. They can do so from April next year, at prevailing market rates.

Alternatively, they can also apply for a 10-year extension upon the expiry of their 30-year lease.
Elderly applicants waiting for their new flats or studio apartments to be completed can also cancel their current applications and apply for a short-lease flat under the new scheme instead. Any forfeiture fees will be waived if they do so before August 19 next year.
The new Two-Room Flexi scheme, which will take effect from September's BTO flat launch, merges and replaces the current studio apartment and two-room flat schemes.

It allows flat applicants aged 55 and above to choose units with shorter leases ranging 15 to 45 years, in five-year intervals. The chosen lease must last them and their spouses till they are at least 95.
First-timer and second-timer families and first-timer singles will continue to be offered the usual 99-year lease flats.
Currently, studio apartments are meant for elderly home owners who have sold a previous flat to fund their retirement. These have a 30-year lease and are for those aged at least 55. Two-room flats come with a 99-year lease and are meant for families or singles. Both flat types come in 36 sq m or 45 sq m sizes.
In March, National Development Minister Khaw Boon Wan first mooted the idea of merging the two schemes as they offer similar flats.
The HDB said it will launch over 70 BTO projects with Two-Room Flexi flats over the next five years.
Prices for these flats, which will come in 36sq m or 45sq m sizes, will depend on the project location and market conditions. Generally, a first-timer family eligible for housing grants can expect to pay about $50,000 for a 99-year lease flat, and $16,700 for a 15-year lease unit.
Second-timer families, who have to pay a resale levy, can expect to fork out about $150,000 for a 99-year lease flat, and $46,700 for a 15-year lease unit.
Second-timers aged 55 and above who sold their first subsidised flat before March 3, 2006 will also get more help when they right-size to a two-room or three-room flat, said the HDB. Instead of paying the percentage resale levy with accrued interest, they will now have the interest waived.
Shorter lease flats will be fitted with elderly friendly features such as grab bars, much like the current studio apartments. Elderly flat buyers who opt for shorter leases will also get to choose whether their flats come with other built-in features, such as flooring, sanitary fittings and built-in kitchen cabinets.
Like studio apartments, these shorter lease flats will be available to private property owners or those who have previously enjoyed housing subsidies. Flats with shorter leases cannot be sublet or sold on the open market.
For more information, members of the public can contact the HDB sales and resale customer service line at 1800-866-3066.