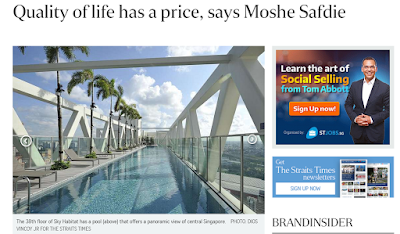 Israeli-Canadian architect Moshe Safdie has received fan mail/ complaint letters from home owners who want to buy a piece of his latest Singapore project, a condominium in Bishan Street 15.

Apartments at the 99-year leasehold Sky Habitat, those writers lamented, are too expensive, though they "desperately wanted to live there".
Safdie, 77, who was in town on Tuesday to do a walkabout of Sky Habitat with members of the media, was taken aback by the letters. "They couldn't afford the units and were blaming me. They wanted me to help them arrange for financing," he says, adding that it was the first time he had received such letters for any of his buildings.
Indeed, the condominium, which has two 38-storey towers, has raised eyebrows for its prices since it was launched in 2012. Then, The Straits Times reported that average prices ranged from $1,747 per square foot (psf) for a one-bedder to $1,642 psf for a four-bedder, making it the most expensive suburban condominiums in Singapore at that time.
Two years later, sales were relaunched and prices were from $1,276 psf to $1,590 psf. By then, 262 apartments at the 509-unit condominium were sold. As of June, 372 of the units have been sold and owners have been moving in since the project was completed in April.

They couldn't afford the units and were blaming me. They wanted me to help them arrange for financing.''
ARCHITECT MOSHE SAFDIE on Sky Habitat, his condominium project in Bishan

The remaining units - ranging from two- to four-bedroom apartments - start from $1,370 psf.
Safdie, who is behind the iconic Marina Bay Sands and the upcoming Project Jewel in Changi Airport, shrugs off the price tag, saying that "quality of life has a price - that is true about anything in life".
He references Americans who have, after years of living in suburban houses, started moving back to high-rise living in city areas in the last decade. "People are not content with cookie-cutter solutions. We, as architects, need to show them where quality of life can be impacted positively by humane and responsive design," says Safdie.
Sky Habitat - developed by CapitaLand Singapore, Mitsubishi Estate Asia and Shimizu Investment (Asia) - is his 2015 ode to his thesis project for his architecture programme at McGill University in Montreal.
As a student, he presented his ideas on modular housing built with prefabricated pieces which would make the properties affordable. He got a boost when the project became a reality as Habitat 67.
It was his first built project. In 2009, the Montreal property, where Safdie owns an apartment, was designated as a heritage site by the Quebec government.
The original masterplan involved 1,000 residences and was designed to make high-density spaces liveable. But Habitat 67 was scaled down to just 158 units - pushing up the price of homes at that time.
But Sky Habitat is not merely a rehash of Habitat 67, says Safdie, who once apprenticed with famed American architect Louis Kahn.
Safdie, who also designed the now-defunct Ardmore Habitat condominium here which has drawn comparisons to Habitat 67, says: "I believe that what constitutes good housing and good community has not changed. All that has evolved is a different way of achieving it. The particular response is more site- and culture-specific, but the principles are absolutely constant."
The principles include apartments having outdoor and indoor spaces, gardens and buildings which connect to nature.
Safdie has used these elements in Sky Habitat. There is much greenery on the property, while owners of terrace units are gifted trees in planter boxes in their balconies to start their own gardens.

He raises the sights, literally, of the Sky Habitat home owner. On the 38th floor, a pool offers a panorama of central Singapore and has one of three sky gardens. The other two are on the 14th and 26th floors.
Many of the apartments have unblocked views as their main windows do not face other units directly, giving home owners privacy, but there are enough communal spaces to socialise elsewhere in the development.
Echoing a call familiar to HDB dwellers, Safdie's design is about encouraging a kampung spirit of sorts. He says the key to a good residential project is striking a balance between community and privacy.
The Boston-based architect, who came here every month to check on Sky Habitat's construction, explains: "There is your own world of your house and it should have reasonable privacy, so you can lead your own family life. But if you give only that, there's no opportunity for community life. You can't impose, but you can give them the opportunity."
The Straits Times/ Business                                                     Published on Saturday, 1 August 2015 By Natahsa Ann Zachariah                                           Quality of life has a price, says Moshe Safdie