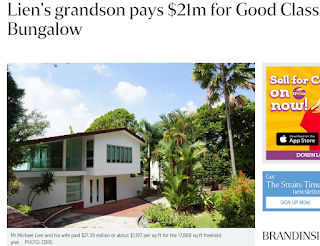 A grandson of the late banker and philanthropist, Mr Lien Ying Chow, has bought a Good Class Bungalow (GCB) in Chee Hoon Avenue after taking part in a tender.
Mr Michael Lien and his wife paid $21.39 million or about $1,197 per sq ft (psf) for the 17,868 sq ft freehold plot, according to caveats lodged.
Mr Lien is executive chairman of Wah Hin & Co, founder of Leap Philanthropy and a board director of Temasek Holdings.
The freehold bungalow, in a cul-de-sac off Adam Road, was put up for sale by CBRE at an indicative value of $25 million.
The detached house, built in the 1960s and renovated in 2005, is partly two-storey and partly one.
The property's built-up area is about 3,300 sq ft, excluding the car porch and rear terrace, with two bedrooms and a study room. It was believed to be a trustee's sale.