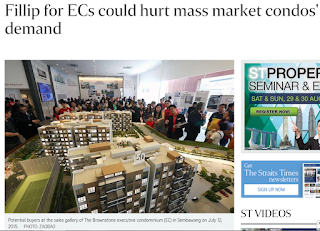 The changes to the eligibility income ceiling announced on Sunday could ignite demand for executive condominiums (EC) and intensify the competition for mass market private homes.

Developers of mass market apartments and ECs are targeting the same group of buyers, so experts expect the battle for sales to be stepped up.
"The same group of eligible buyers have the option to purchase ECs, and buyers today are already taking more time to decide compared with a year ago," said Cushman & Wakefield research director Christine Li.
"Mass market condos on the market could find it even harder to attract buyers."
Property agencies spent yesterday fielding enquiries from potential EC buyers, some of whom had been ineligible under the old income ceiling rules, said PropNex team director William Lim.

More expensive mass market homes, and those not near MRT stations, are expected to suffer more. A new or well-maintained completed private home priced below $1,000 per sq ft might not be as affected - the price differential is too narrow and buyers may prefer to forfeit their privilege to buy an EC, said Savills Singapore research head Alan Cheong.

Mr Mohd Ismail, PropNex chief executive, said that many people at recent EC launches - including The Brownstone, The Vales and Sol Acres - had booked units even though they were ineligible at the time and had lodged appeals with the HDB.
"With (Sunday's) announcement, all these people will benefit."
The income ceiling for new HDB flats and ECs has been raised by $2,000 each to $12,000 and $14,000 respectively, Prime Minister Lee Hsien Loong said at the National Day Rally on Sunday. The changes kicked in yesterday.
MCL Land's Sol Acres, which launched last Saturday, has sold 249 units. "There should be more sales in general from the enlarged pool of eligible buyers," said the company's chief executive Koh Teck Chuan.
Qingjian Realty head of sales and marketing Donald Ng said while more people who had been ineligible have been visiting the company's developments' showflats recently, "everyone will have to work hard to see how we can translate those leads into sales".
Knight Frank executive chairman Tan Tiong Cheng said the policy move would certainly take away some demand for mass market homes.
"For new families and owner-occupiers, an EC is the logical choice between the two asset types, given the savings - a difference of about $300 per sq ft, which could be more than $250,000 - and that you are getting the same location, more or less the same product," he said.
"The only difference is that there are fewer restrictions in the private property market and more variety."
More expensive mass market homes, and those not near MRT stations, are expected to suffer more. A new or well-maintained completed private home priced below $1,000 per sq ft might not be as affected - the price differential is too narrow and buyers may prefer to forfeit their privilege to buy an EC, said Savills Singapore research head Alan Cheong.
"But if the pricing is in the $1,000 to $1,200 psf range, the relative gap to ECs in the $800 psf level is relatively large and may influence some to look at ECs instead."
Overall, prices for both segments may not move much. While private developers will price sensibly to get sales, there is a limit to how much they can cut given higher land costs, said ERA Realty key executive officer Eugene Lim.
Experts also noted that the bulk of EC buyers do not usually earn more than $10,000 a month and often rely on parents' savings for their purchases, so a higher income ceiling may not substantially change the buyer profile. Those earning more than $10,000 have many options and may have other aspirations, they said.
The Straits Times / Top of The News                                    Published on Tuesday, 25 August 2015 By Rennie Whang                                     Fillip for ECs could hurt mass market condos' demand


Condos Properties
Development charge rates for residential site to stay the same
Mortgagee sales of larger home on the rise
$15.8m loss in St Regis penthouse sale 'small change' for Japanese billionaire
New private home sales surge in July, thanks to Fernvale project
Jump in number of M'sian and Chinese buyers of S'pore properties in Q2: DTZ
It's a shore thing for these owners of seaside homes
Private property market 'stabilising'
Quality of life has a price, says Moshe Safdie
Bumper crop of shoebox units to come in 2017
Private apartments prices continue slide
Demand up for high-end homes except for those on Sentosa