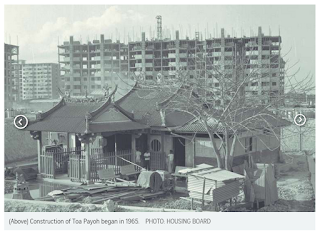 When Madam Lim Geok Chuan moved from a kampung house in Upper Thomson to the first Housing Board new town, Toa Payoh, it was with her family - and a small flock of chickens.
Most of the birds ended up in the family cooking pot as Madam Lim, her husband, their seven children and her mother-in-law settled into their three-room flat. However, one of the birds was presented to a neighbour as an introductory gift. 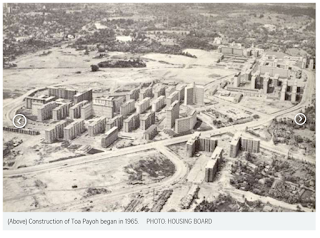 Fifty years after construction started on the first of several new towns entirely built and planned by the HDB, there are no clucking kampung chickens. But Madam Lim, 92, and her 99-year-old husband, Mr Tan Meng Choon, still live in the same second-floor flat that they moved into in 1969. 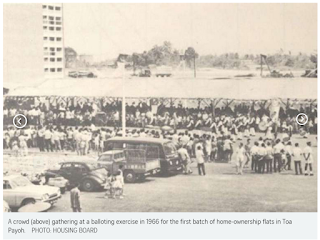 We spent hard-earned money to build the (kampung) house, so when we had to let it go and be resettled, my heart really ached.
MADAM LIM GEOK CHUAN

At first, there was only one other household on the same floor. But Madam Lim soon had friends on many other floors, as the block filled up with fellow pioneers. It was a change from the Tans' former home in Hai Lam Sua kampung. The zinc-roofed houses were scattered and isolated: "One here, one there," recalled Madam Lim. 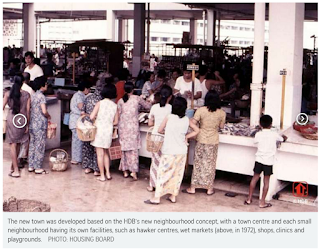 Running water and an inside toilet were other HDB pluses. "Here, you don't have to fetch water from the well," said Madam Lim. And the kampung toilet had been a hole in the ground outside. "When you went in the middle of the night and saw the leaves of banana trees waving, it was scary," she said, laughing.
She also appreciates having shops close by. Toa Payoh, or "big swamp" in Hokkien, was planned around the HDB's new neighbourhood concept, with a town centre and each small neighbourhood having its own facilities.
"In the kampung, when we went to the shops, we always had to walk, walk, walk," she said.
When they moved in, the HDB block right in front of theirs boasted several provision shops, a cloth shop and one selling household goods. Today, it also has hair salons, a bank and a furniture shop.
The neighbourhood concept has endured and evolved, with malls, green spaces and sports courts among the amenities that today's planners provide for.
In the 1950s, before the new town - comprising 36,000 housing units - was built, Toa Payoh was home to about 21,000 people who lived mostly in squatter houses. With the advent of public housing, just over a third of Singapore's residents lived in such housing, compared with over 80 per cent today.
But initially, the Tan family, like many who were forcibly resettled, did not want to move to the new town. "People said Toa Payoh was not a good place. There were a lot of gangsters and thieves," recalled Madam Lim.
There was some sadness, too, as Madam Lim, who used to tend the garden and livestock while her husband worked in construction, pointed out: "We spent hard-earned money to build the (kampung) house, so when we had to let it go and be resettled, my heart really ached."
For about a year after being notified of resettlement, the family stayed on. Government officials came by to measure their land, to calculate the compensation.
By 1969, an average of 6,000 families were being resettled each year, with the HDB paying $5 million or about $850 per family on average. 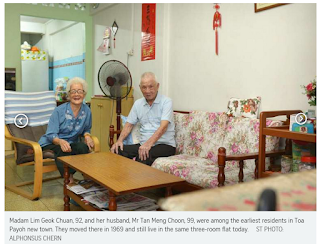 Resettled families were compensated with government housing and cash grants. The Tans were allocated a second-floor flat, but thought it was too low. But when bulldozers came for their neighbours' kampung houses, they decided to take it.
Ten people living in a three-room flat was not much more crowded than in a kampung house, though the Tan family was a bit larger than the norm. In 1968, there was an average of six people in each HDB household. Today, it is 3.4.
Over the decades, the HDB flat has gained the dual role of home and asset, with owners keeping an eye on the resale market and pondering gains on premium projects such as Pinnacle@Duxton.
As for Madam Lim, did she miss her old place? "A little, at first. But not any more. This is home."
The Straits Times / Housing               Published on Sunday, 9 August 2015                                         By Janice Heng                                      From 'gangsterland' to home sweet home
Please click the following for other Related Readings:


It's a shore thing for these owners of seaside homes