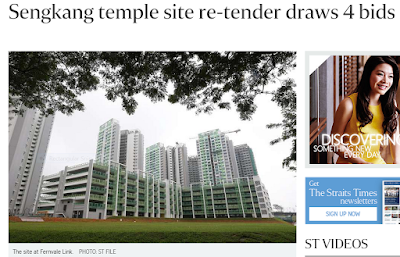 Four applications for the development of a Chinese temple in Sengkang have been submitted, three months after a new tender was called following controversy about a planned columbarium.

The second tender - for the site at Fernvale Link - closed yesterday and included only bids from non-profit organisations. It came after residents protested against the planned construction of a commercial columbarium in January.
The new bidders for the plot are the Thye Hua Kwan Moral Society, Buddhist Compassion Relief Tzu Chi Foundation Singapore, Lorong Koo Chye Sheng Hong Temple Association and the Taoist Peng Hong Association. Provisional tender results were posted on HDB's website yesterday. A decision on which group will be awarded the tender will be announced at a later date.
The Peng Hong Association was one of the original bidders for the first tender in May last year.
The 2,000 sq m plot of land was originally awarded to funeral service firm Life Corporation's subsidiary Eternal Pure Land, which planned to run both a Chinese temple and columbarium at the site.