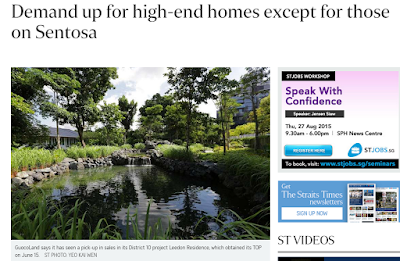 The outlook for home sales on Sentosa is bleak but demand is growing for high-end homes elsewhere, including in surrounding District 4.
About 10 units were sold at Caribbean at Keppel Bay in the second quarter, up from three in the first, according to SRX Property data.
In the primary market, eight units were moved at Corals at Keppel Bay in the three months to June 30, up from one in the first. The developer is offering a 4 to 5 per cent discount, according to caveats lodged.
"There is nowhere else in Singapore you can get the same asset quality as in the Sentosa area - close to the central business district yet near the sea. Prices have reached a point where they are not likely to fall further," said Mr Navin Bafna, a PropNex associate team director.
For example, two units at Caribbean were sold at an average price of $1,456 psf last month - much lower than in June 2013, when five units went at an average $1,648 psf.

CUTTING PRICES NOT GOOD STRATEGY
"If we are known to be the type to cut prices to move volume, it is not a good strategy in the current market, as people will then wait with these expectations."
MR CHENG HSING YAO, managing director of GuocoLand Singapore, on keeping prices consistent

Developer GuocoLand said yesterday that it has seen a pick-up in sales in its District 10 project Leedon Residence, which achieved its temporary occupation permit on June 15. It has sold 24 units in the past six weeks, worth over $110 million in transaction value, it said.
The luxury project has sold 181 of 381 units so far at around $1,800 to $2,500 psf. Two- to five-bedroom apartments at the project range from 1,000 to 8,000 sq ft.
"Buyers, especially ultra-high-net-worth individuals, will always have some doubt when purchasing off-plan. With a completed project, they now have clear evidence of whether a property is value for money," said Mr Alan Cheong, Savills Singapore research head.
Mr Cheng Hsing Yao, managing director of GuocoLand Singapore, said the company has kept prices consistent, "in relation to what we think is the fair value".
"That has always been our policy, as we take a long-term view: For buyers who have already bought, that is not something they would like. And if we are known to be the type to cut prices to move volume, it is not a good strategy in the current market, as people will then wait with these expectations."
The project's location next to the Leedon Park Good Class Bungalow estate, its sprawling 5ha site and freehold status are all positive attributes, he added.
About 70 per cent of buyers are purchasing for their own use.
GuocoLand has about 12 units left to sell at its other luxury project in District 10, the 210-unit Goodwood Residence in Bukit Timah which was completed in June 2013.
In District 1, Marina Bay Suites has just two unsold units. The project, also completed in June 2013, sold 10 units in the second quarter, up from three in the first and just one in the fourth quarter last year, according to caveats.

The sales included an 8,514 sq ft penthouse for $19.52 million to a fund manager from China in late May. The remaining units are four-bedroom high-floor homes, said a spokesman for Raffles Quay Asset Management. The sales came after an increase in discount to list prices at the project to 25 per cent (from 10 per cent).
In general, secondary sales figures picked up in the second quarter across all types of buyers - Singaporeans, permanent residents and foreigners, especially Chinese nationals and Malaysians, said Dr Lee Nai Jia, DTZ research head.
"This is partly a seasonal effect, as it is before the (Chinese) seventh month... The market has also adjusted to a new equilibrium."
The Straits Times / S'pore               Published on Friday, 31 July 2015                                              By Rennie Whang                             Demand up for high-end homes except for those on Sentosa
Please click the following for other Related Readings: