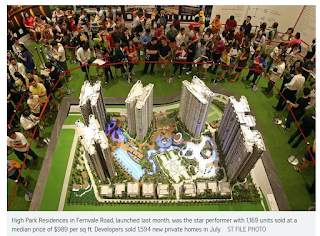 New private home sales spiked last month owing to a strong showing
at one condo launch, but sales numbers are likely to be muted over
the next few months.

Developers sold 1,594 new private homes in July, more than four times the 375 homes sold in June.
These were the highest sales posted since June 2013, when 1,806 new private homes were sold.
July's new launch, High Park Residences in Fernvale Road, was the star performer. It sold 1,169 units at a median price of $989 per sq ft.
Mr Desmond Sim, CBRE research head for Singapore and South-east Asia, noted that the project has ridden on "quantum play", where small-sized units have made individual unit prices palatable. Most of the units sold are less than a million dollars each, with about 15 per cent under $500,000.
The cheapest unit sold so far is a sixth-floor, 388 sq ft unit which went for $373,450 last month.
Two-bedders at the project are about 570 sq ft to 732 sq ft while three-bedders are about 872 sq ft to 990 sq ft.
Advertising firm owner Ken Low bought a two-bedroom deluxe unit for about $650,000 as an investment. "The project is attractively priced and also ties in with plans for the upcoming regional centre in Seletar," he said.
Other projects that sold well were Botanique at Bartley, which moved 63 units at a median price of $1,282 psf; City Gate, which sold 26 units at a median of $1,813 psf; and Riverbank@Fernvale, with 25 units sold at a median of $959 psf - lower than median prices of around $1,000 psf seen in earlier months.

Mr Eugene Lim, ERA Realty key executive officer, said that while prices have been tweaked selectively, increased sales are largely due to marketing efforts to clear stock - with promotion periods and star-buy units, for example.
Some buyers may have returned to the market after the June school holidays, or sped up their decision-making to avoid buying during the Hungry Ghost month, which started last Friday, said PropNex Realty chief executive Mohd Ismail.
Excluding High Park Residences, developer sales were about 425 from previously launched projects - in line with underlying demand seen in earlier months of about 300 to 500, said CBRE's Mr Sim.
Most expect the new sales market to be quieter over the next few
months. But the executive condominium (EC) market should
be active, especially once the Government confirms an upward
revision of the income ceiling for EC buyers, said Mr Lim.

Seniors can use more of Medisave for IP premiums