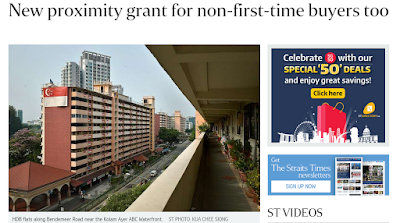 A new housing grant will be introduced to further help families live closer together.

The Proximity Housing Grant will go to those buying a resale flat with or nearer to their parents, or near their married children.
It will be available to all Singaporean households including non- first-time buyers, said Prime Minister Lee Hsien Loong yesterday during his National Day Rally speech.
"Parents often would want to stay with or near their married children. So that the grandparents can enjoy their grandkids, and the adult children can help to look after the old folks as they age," Mr Lee said 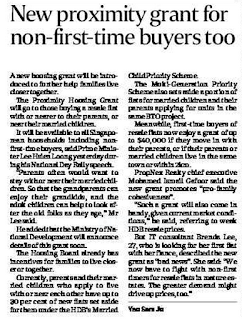 He added that the Ministry of National Development will announce details of this grant soon.
The Housing Board already has incentives for families to live closer or together.
Currently, parents and their married children who apply to live with or near each other have up to 30 per cent of new flats set aside for them under the HDB's Married Child Priority Scheme.
The Multi-Generation Priority Scheme also sets aside a portion of flats for married children and their parents applying for units in the same BTO project.