SINGAPORE - The Housing Board (HDB) has addressed allegations by a tower crane operator that unsafe practices were occurring at a Punggol construction site.
The Singaporean operator had reported to HDB on Aug 3 that he had observed water being added to the cement mix on-site, which he said was not the proper method.
In a statement posted on their "HDB Speaks" portal on Tuesday, the board said that they had conducted investigations at the site and found safety practices to be in order.
A complaint regarding the same case had surfaced online at the same time on non-profit website transitioning.org.
The writer, who gave his name as "Edward", claimed he had been fired for trying to expose his company's unsafe practices at an Edgedale Plains public housing project.
He wrote: "I have observed the way foreign workers (build) our HDB (build-to-order flats) in a very wrong way."
"Even after water was added from the cement truck they (continued) to add water during casting when the bucket (reached) the top. Mixing of water can only be done in the cement plant and when it reaches the site no more water should be added to it.
"I can no longer keep quiet about this because one day I'll stay in one of (these flats) too."
He added that his signal men had also threatened him after he took photos of their "reckless unsafe hoisting procedures." 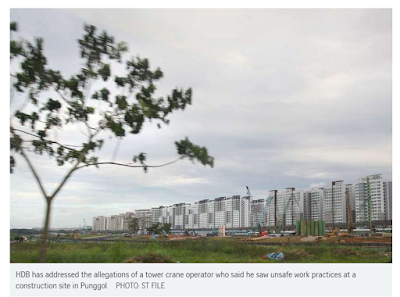