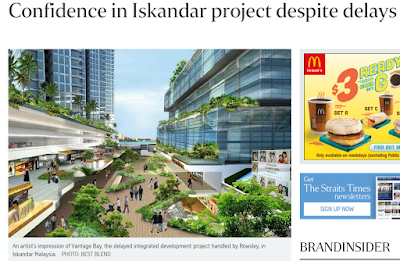 Rowsley will be patient with the progress of its Vantage Bay project in Iskandar Malaysia despite weaker demand there, chief executive Lock Wai Han said yesterday.

The Singapore-listed firm's Vantage Bay - an integrated development project - has hit a snag after it was first proposed in 2012, becoming one of several Iskandar projects to face constant delays, owing partly to real estate oversupply in the special economic zone.
But Rowsley is still confident about the project's outlook, Mr Lock told The Straits Times during a visit to Manchester to announce investments there.
"At the time when we went in (to Iskandar), it was clearly the right decision. But market risks and policy risks cannot be fully predicted. The market has changed, but we still believe in the long-term potential of Johor and Malaysia."
He added that Rowsley will not run into similar issues with its new ventures in Manchester, including a city centre mixed-use development called St Michael's .