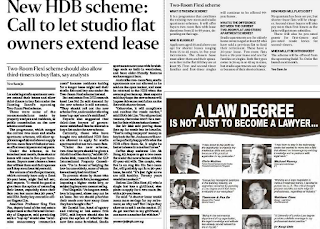 Let existing studio apartment owners extend their leases and allow third-timers to buy flats under the Housing Board's upcoming Two-Room Flexi scheme.
These were some of the recommendations made by property analysts and residents, as public consultation on the new scheme continues.
The programme, which merges the current two-room and studio apartment schemes, will allow applicants aged 55 and above to apply for two-room flats with shorter leases of between 15 years and 45 years.
Under the scheme, to be launched next month, these shorter leases will come in five-year increments. Buyers must choose a lease that will last them and their spouses until they are at least 95 years old.

But owners of studio apartments, which currently have only a fixed 30-year lease, might feel left out, said experts. "It would be good to give them the option of extending their leases, especially since their flats can last more than 30 years," said ERA Realty key executive officer Eugene Lim.
Associate Professor Sing Tien Foo, deputy head of the real estate department at the National University of Singapore, said permitting such a "top-up" would also "minimise unnecessary transaction costs" because residents looking for a longer lease might sell their studio flats and buy one under the Two-Room Flexi scheme instead.
But real estate firm DTZ research head Lee Nai Jia said demand for the new scheme is still untested. "They should roll out the new scheme first, and consider allowing lease 'top-ups' once it's stabilised."
Experts also suggested that third-time buyers of government-subsidised flats be allowed to buy a flat under the new scheme.
Currently, those who have bought two subsidised HDB flats are allowed to apply for studio apartments but not two-room flats.
"Under the new scheme, two-time buyers should be given a third bite of the cherry," said Mr Nicholas Mak, research head for SLP International Property Consultants. "I'm in favour of helping the low-income elderly, some of whom have already had two bites."
To prevent abuse by those who do not need such flats, he suggested imposing a higher resale levy, or subjecting buyers to means testing.
Prof Sing said: "As long as a resale levy is imposed, abuse may not be an issue. But we should prioritise their needs over how many times they have bought a flat."
Mr Donald Yeo, head of agency and training at real estate firm DWG, said buyers should also be given the option of whether the new flats come furnished. Studio apartments now come with furnishings such as built-in wardrobes, and have elder-friendly features such as support bars.
And unlike two-room flats, studio apartments are not allowed to be sold on the open market, and must be returned to the HDB when the owners give them up. Most experts said they hope the new scheme will impose this same restriction on the flats with shorter leases.
"Otherwise, it will complicate and confuse the resale market," said ERA's Mr Lim. "For all practical reasons, there also won't be a market for flats with such short leases."
But Mr Mak said putting these flats up for resale has its benefits. "You're using taxpayers' money to buy back the flat. And some will never be perfectly happy with what the HDB offers them. So, it might be better to leave it to market forces."
Coffee shop assistant Lim Ah Keng, 69, hopes to get a two-room flat under the new scheme with his 67-year-old wife. The couple, who live in an Ang Mo Kio four-room flat, will probably opt for a 30-year lease, he said. "It's just right as we are still healthy. Twenty years would be too short."
Retiree Lim Chin Huat, 67, who is single but has a girlfriend, also plans to apply for a two-room flat with a 30-year lease.
He said: "A shorter lease would mean more savings for my retirement, so why not? But I hope they allow us to sell it on the market. If I do get married to my girlfriend, I can move to another flat with her."
The Straits Times /Housing                                                     Published on Monday, 17 August 2015  By Yeo Sam Jo                                New HDB scheme: Call to let studio flat owners extend lease