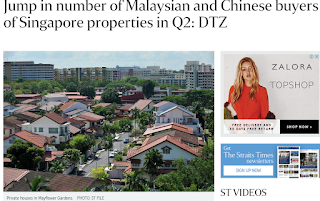 SINGAPORE - The number of Malaysian and mainland Chinese buyers of Singapore private homes jumped in the second quarter compared to the first three months of the year, according to research from global real estate services firm DTZ.
"This increased activity coincided with heightened economic uncertainty in China and political concerns in Malaysia," DTZ noted, adding that these buyers were aiming to preserve their wealth.
Purchases by Malaysian buyers rose the most, by 53 per cent q-o-q, to 248 units. Not far behind, were buyers from China who signed for 232 units.
Together, buyers from these two countries accounted for almost half of the purchases by non-Singaporeans in the second quarter. This added up to 1,017 units - 381 units, or 60 per cent, more than in the first quarter, but still below the approximately 1,250 units sold to foreigners in the same quarter last year. 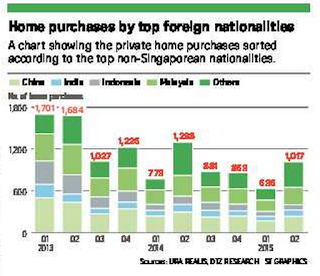 Mr Lee Nai Jia, regional head of research at DTZ, said that the firm had expected to see a drop in the number of Malaysian buyers coming to Singapore given the fall of the ringgit - but the opposite occurred.
He told the Straits Times: "I think all the political issues in Malaysia has hindered some of the structural reforms that were supposed to take place. That has become a concern among Malaysian buyers, moving them towards Singapore."
He added: "They want to make sure that their money and their wealth is intact and doesn't depreciate further."