Investors may face trouble leasing them out on supply rise, smaller renter base: Analysts 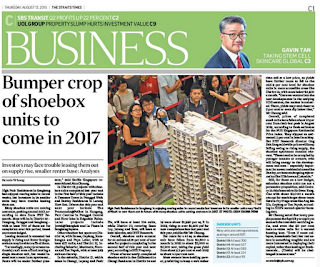 High Park Residences in Sengkang has enjoyed roaring sales in recent weeks, but investors in its smaller units may have trouble leasing them out.

Many shoebox units are coming onstream, peaking around 2017, according to data from R'ST Research. Most will be in District 19 - Hougang, Punggol and Sengkang - with at least 700 of them set for completion over this period, based on caveats lodged.
Leasing demand is untested but supply is rising and fewer foreigners here may be able to afford them.
"Increasingly, many (overseas nationals) can't even afford renting a single shoebox unit, but would instead rent a room in an apartment... Rents will be under further pressure," said Savills Singapore research head Alan Cheong.
In District 19, projects with shoebox units completed last year and in the first half of this year include A Treasure Trove in Punggol Walk and Bartley Residences in Lorong How Sun. Others due this year and next year include The Promenade@Pelikat in Hougang, Parc Centros in Punggol Central and River Isles in Edgedale Plains. Later projects include Jewel@Buangkok and La Fiesta in Sengkang Square.
Other shoebox hot spots are District 14, with Eunos, Geylang, Kembangan and Paya Lebar, with at least 527 units; and District 12, including Balestier, Moulmein, Novena and Toa Payoh, with at least 383 units on the way.
In the suburbs, District 17, which takes in Changi, Loyang and Pasir Ris, will have at least 224 units, while District 22, covering Boon Lay, Jurong and Tuas, will have at least 151 units, said R'ST Research.
Overall, shoebox units account for an estimated 18 per cent of new sales for projects completing in the second half of this year and next year, according to SRX Property.
Prices of some newly-completed shoebox units in the Guillemard to Changi Road area in District 14 and 15 were about $1,350 per sq ft in 2013, rising to over $1,400 psf for new completions late last year and this year, said Savills' Mr Cheong.
But rents for a 41 sq m shoebox unit have fallen from $2,600 a month in 2013 to about $2,000 to $2,200 now, taking the gross yield from about 5.2 per cent at end-2013 to about 4.1 per cent now.
Most owners have holding power, preferring to keep a unit rather than sell at a low price, so yields have further room to fall to the mid-3 per cent level for shoebox units in more accessible areas like District 14, with rents below $2,500 a month. "Once we venture into the new developments in the outlying HDB estates, the market is untested. There, yields may tend closer to 3 per cent or even dip below that," Mr Cheong said.
Overall, prices of completed small units have fallen about 10 per cent from their last peak in August 2013, according to flash estimates for the NUS Singapore Residential Price Index. They slipped an estimated 1.1 per cent in June from May. But R'ST Research director Ong Kah Seng said while prices will keep falling owing to rising supply, the shoebox apartment remains relevant. "These tend to be occupied by younger tenants or owners, who will bring energy to the development and area - especially important for newer residential areas like Bartley, or those undergoing rejuvenation like Hillview and Lakeside."