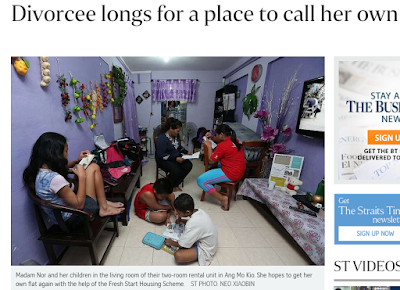 Madam Nor, a divorcee pushed into rental housing, cheered on Sunday night when Prime Minister Lee Hsien Loong announced that he wanted to help previous home owners own a property again.

The 36-year-old part-time admin assistant, who asked to be identified by only her first name, sold her three-room flat in 2010 when the family could not make loan payments. Since then, her housing situation has been thrown into disarray.
At her lowest point, Madam Nor and her four children - now aged nine, 10, 11 and 12 - bunked in with her sister's family, and the 13 of them squeezed into a two-room rental flat for a year.
She was later put on the interim housing scheme, run by the Housing Board, in 2012, paying $210 a month to use one bedroom.
Things eased last December when she was granted a two- room rental unit in Ang Mo Kio for $230 a month.
Still, Madam Nor longs for a place to call her own.
"$230 for a rental flat; I might as well top up a few hundred and own my own property," she said.
The rent, coupled with utility and service and conservancy charges, sets Madam Nor back almost $600 a month when she earns just $1,000.
She could not get subsidies for another flat despite having $80,000 in her Central Provident Fund because she had already taken two HDB concessionary loans with her former husband.

At the National Day Rally on Sunday, Mr Lee announced the Fresh Start Housing Scheme, which Madam Nor hopes to benefit from. The scheme targets those in rental flat households with young children who used to own flats and want to buy a flat again. There could also be a grant to help pay for the two-room flats if families show they are putting their lives in order, Mr Lee said.
Madam Nor said having a home outside of rental units will allow her to go for upgrading courses in peace. Currently, she worries about the company her children keep when she is away, as the rental block's neighbourhood is rife with fighting, drinking and loiterers. "I'm at work but wondering where they are, calling to make sure they are at home and safe," she said.
"I really hope I can have my own property. At least, whatever happens to me, my kids have my property to fall back on. In Singapore, who doesn't want their own property?"
The Straits Times / S'pore                                                       Published on Tuesday, 25 August 2015 By Kok Xing Hui                                                      Divorcee longs for a place to call her own

Condos Properties
Development charge rates for residential site to stay the same
Mortgagee sales of larger home on the rise
$15.8m loss in St Regis penthouse sale 'small change' for Japanese billionaire
New private home sales surge in July, thanks to Fernvale project
Jump in number of M'sian and Chinese buyers of S'pore properties in Q2: DTZ
It's a shore thing for these owners of seaside homes
Private property market 'stabilising'
Quality of life has a price, says Moshe Safdie
Bumper crop of shoebox units to come in 2017
Private apartments prices continue slide
Demand up for high-end homes except for those on Sentosa