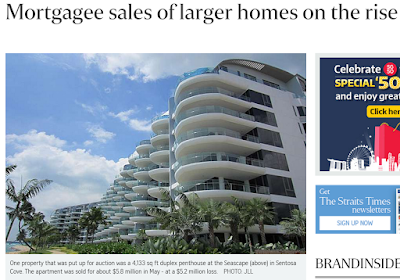 Larger homes are increasingly going up for mortgagee sale, amid higher interest rates and a slumping leasing market.
The smaller pool of buyers for such prime properties and the tougher lending rules mean that strapped owners often have no choice but to let the bank step in and put the home up for sale.
There were 99 homes put up for mortgagee sale in the first seven months of the year, well up from the 51 in the same period last year and 11 in 2013, according to figures from Colliers International.
Landed homes have figured more prominently as well, with 18 going under the hammer in the seven months to July 31 this year, up from 10 last year and seven in 2013.
Most of the landed properties put up for auction by lenders were on larger sites, such as corner terrace, semi-detached or detached houses, said Ms Grace Ng, deputy managing director of Colliers International.
"Borrowers who are experiencing difficulties in servicing their loans face difficulties in disposing of their properties due to the higher price tags that come with these larger landed homes," she added.
Cooling measures, including the Additional Buyers' Stamp Duty and loan curbs, have also made it difficult for potential buyers to get loans. On top of that, landed properties can be bought only by Singaporeans and permanent residents with approval.
A good class bungalow (GCB) in Binjai Rise and a detached house in One Tree Hill were among the properties that have gone under the hammer in mortgagee sales in the seven months to July 31. No caveats have been lodged for the bungalow, while the One Tree Hill house sold for $9.38 million in June.
An increasing number of apartments listed for mortgagee sale this year have been large, with floor areas of over 1,500 sq ft, noted Ms Ng.
"These sizeable non-landed homes, which were popular during the market boom in 2007 and 2008, are now languishing in demand - suffering from a wane in both foreign and local buying interest due to affordability concerns following stringent loan curbs."
Owners are also finding it hard to find tenants for these units because of reduced housing budgets for expatriates, which then leads to difficulties in servicing their loans.
A 4,133 sq ft duplex penthouse at the Seascape in Sentosa Cove and a 1,873 sq ft Orchard Scotts unit were two put up for auction. The Seascape unit sold for about $5.8 million in May, at a $5.2 million loss, while the Orchard unit went for $2.8 million in June, at a loss of about $824,000.
Large apartments tend to be popular at auction as they attract more owner-occupiers, while smaller units appeal more to investors, who have become wary in a softening rental market, said Ms Mok Sze Sze, head of auction and sales at JLL.
"Four-bedroom apartments in central locations are popular among (occupiers). Larger houses involve much higher quantum in sale price - thus, the pool of buyers is relatively smaller," she said.
Overall, 19 properties with a total value of $35.3 million were sold via mortgagee sale in the first seven months of the year, up from 12 homes valued at $15.7 million last year and five properties worth $7.7 million in 2013, said Colliers.
The number of mortgagee sales should go up in tandem with the expected rise in interest rates and softening in rents, and could hit 200 by the year end, said Colliers' Ms Ng.
The figures will still be lower than those during the Lehman Brothers crisis in 2008, when 270 properties were put up for mortgagee sale, and well below the 452 properties put up during the 1998 Asian financial crisis.
The Straits Times/ Business                                                Published on Thursday, 20 August 2015 By Rennie Whang                                                         Mortgagee sales of larger home on the rise